Some of you may have noticed that I haven't updated my web log in awhile. Here are the reasons.

Work - I'm in crunch mode at work. Basically, now that most of Adobe's products are part of a suite, I'm extra busy whenever the suites near the end of the 18-month cycle. Now is that time. After the suites ship, I'll be in cruise mode for the next year or so, and then it ramps up all over again. In the past, writers worked on several different products during the year, sharing the workload. Now, the writers work on one project, unless of course there aren't enough writers, in which case certain writers have to work on multiple products. In my case, I'm responsible for four different help systems -- InDesign, InCopy, Version Cue, and some goofy Japanese product. As compensation, I have demanded two extra phones for my desk.

Lisa - My sister has cancer -- a particularly aggressive form of lymphoma. No, it's not Hodgkins, which is highly treatable. Non-Hodgkins lymphoma is still treatable, and Lisa has a good chance of surviving. Still, Lisa's cancer made me profoundly sad. She's a single mother of a 1-year-old toddler who's now undergoing chemotherapy, which is harsher than aromatherapy by a good margin. I've been meaning to write about Lisa, but the situation was too depressing and uncertain. I thought about writing other entries, but I kept wanting -- and not wanting -- to write about Lisa, if that makes sense.

One good thing about being alone at Tiger Mountain is that I took a particularly embarrassing fall that I'm glad no one saw. It was one of those slow-motion falls that lends itself to announcers. Here's what the announcers would have said if they had been there.

Announcer 1: And here comes Bob riding up the trail. This is unusual because most mountain bikers ride up the 5-mile dirt road and ride down the singletrack trail, while Bob is riding up. Isn't that unusual, Announcer 2?

Announcer 2: Sort of. I know people who put their bikes on ski lifts to go up to the top of the mountain.

A1: Right, it's very unusual. And here goes Bob. He's riding up over a set of roots, and IT LOOKS LIKE HE'S NOT GOING TO MAKE IT!

A2: He's tipping over. I though he could pull it out, but he tipped over.

A1: He's on a downslope right now with his hand just above a puddle.

A1: I have a better question -- Why did he slide the side of his body into the puddle like that?

A1: Look. Now he just put his foot in the puddle. It's like he doesn't care anymore about personal hygiene. What's next? Will he throw himself headlong into the puddle and make a mud angel?

A2: No, he's made it out. He's swearing. He's saying lots of swear words right now, aloud.

A1: "Chit. Ducking duck. Some in a ducking birch." That's all I could make out.

A2: He's riding again. Oh, here comes someone down the hill. They just rode by.

A1: Yes, and he's gone now. That was uneventful. Let's hope Bob comes down again. That should be fun.

I also rode Crop Circles this morning while listening to Bruce Springsteen.

Music - It's official. In any desert island scenario, the Boss would make it on my list, even if it's a list of one. I just discovered an album of his called "Born in the USA."

Television - It's also official. Deadwood is my favorite television show. I'm not saying it's the best. But for me, it's the most watchable and rewatchable. It's oddly ugly in its beauty and beautiful in its ugliness.

And now I better stop ignoring the twins.

A Graphic Is Worth a Thousand Words

This chart was created by a Frenchman named Charles Joseph Minard who wanted to show the losses suffered by Napolean's army that invaded Russia.

I love this graphic because it tells a story using several variables. The brown band depicts the size of the army as it invaded Russia with 422,000 men. As they travel eastward in the cold weather, the band thins as men die or run off. By the time they get to Moscow, there are only 100,000 men left. The black band represents their return journey. The line at the bottom of the graphic shows the falling temperatures during the return. That little tiny black band that meets up with the beginning of the brown band represents the number of men who made it home -- about 10,000.

After analyzing this graphic, I've come to the conclusion that invading Moscow was a tactical error.
Posted by Bob at Tuesday, June 17, 2008 10 comments:

The ride starts at Marymoor Park near the Microsoft campus in Redmond. It goes through what we writers call bucolic scenery in which we head through rolling farm lands and pass through quaint small towns like Duvall, Snohomish, and Carnation.

The ride starts at 8:00 am. I wanted to end the ride early in the afternoon because both my brother and Robert's family were coming back to town. Unfortunately, there was a huge line of cars waiting to park, so I didn't get on the bike until 8:15. I rolled along for a couple miles when it hit me -- I didn't lock the car door. In fact, I think I may have left the passenger door wide open when I was putting on my bike shoes. Here's one of the nice things about getting old -- you know who you are and how your mind works. I knew if I didn't turn back then, I'd have spent the entire ride obsessing about my ransacked car with a dead battery. So I turned around, locked the car, and started the ride all over again.

At the 15-mile mark, I reached the first rest stop. I thought about not stopping because I had ridden only 15 miles -- actually 20 miles if you include the turnaround -- but I wanted to see if I could get a map since the course wasn't marked. And what I saw was the best stocked rest stop out of any ride I've been on. It had twenty kinds of energy bars, various power gels and glu shots, bread and bagels for making PBJs, cookies in packages, pop tarts, and all kinds of sports drinks. Unable to resist the siren song of "free stuff," I loaded my pockets and took off.

I rode another 60 miles when I decided to attack. I blew by a few startled cyclists, and then rode to the finish line. At that point, I drove home. And that is the end of this account.
Posted by Bob at Sunday, June 15, 2008 3 comments: 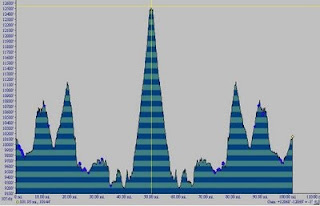 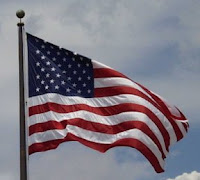 For that reason alone, I should have been for Obama all along. I'm sorry for ever wavering. Forgive me, reader. And forgive me, Mr. Obama.
Posted by Bob at Tuesday, June 03, 2008 9 comments: