Film Review: Sex and the City 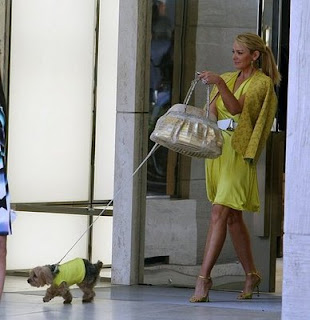 Wendy has been out of town this week and I have a big deadline coming up, so things have been a little frantic as I've juggled watching the kids and working. Last night, I decided I needed a break, so I went to the 9:20 showing of Sex and the City.

I didn't think I needed a babysitter because the boys are usually asleep by 8:30, but they stayed up late last night so I just had to jam their door shut and hurry to the theater.

Sex and the City is a laugh a minute! I say that objectively, although I must admit the Cosmopolitan I snuck into the movie house loosened me up a bit. I don't want to give away any details, but I have to!

The most touching scene occurred when Carrie was at Samantha's wedding wearing an expensive pair of rented shoes. Because of an earlier dramatic scene, Carrie was sad, and she wasn't sure whether she would ever laugh again. Fortunately, Miranda soiled herself, and Carrie was able to laugh again!
Posted by Bob at Thursday, May 29, 2008 2 comments:

Assorted Issues for the Month of May

I recently mentioned that I'm busy at work, so I won't be updating this web log regularly through the summer. I'm thinking either two or three sloppy posts a week, or one really well-written post like this one.

I got my Leadville packet in the mail. In the past, this has been a moment of great excitement. When I've seen the packet in the mail, I dropped the rest of the mail on the floor, shouted something loud and incomprehensible, and tinkled in my shorts a little bit. This time, it's different. I got the Leadville packet on Monday and still haven't opened it. It's just sitting there on the coffee table.

I don't know why I haven't opened the packet yet. Do I look like a psychologist? I'm sure one contributing factor has been the fact that I've had two nasty sicknesses this year -- bronchitis and a cold that kept me off the bike for two weeks. Another factor is my fat suit. I weigh the exact same amount that I weighed in January. I'm 182 pounds. Last year, I weighed 172 pounds for Leadville, and I missed the 12-hour mark by 25 minutes. Gulp. Yet another factor is the memory of last year's race. The whole experience was great, but the race itself was torture for the final eight hours. Do I really want to go through that again, only this time fatter, older, and slower?

Wendy has an interesting job in which she gets paid half a salary year-round for working 26 weeks a year. She has some time off, so she took the boys to Indiana to visit her family. I'm swamped at work (see above), so I couldn't go. She and Kim drove the boys down to the Memphis area so the boys could spend time with their grandparents, uncles, and cousins from Wendy's side of the family. One of Wendy's brothers is a henpecked born-again christian who is married to a mean, 240-pound battle axe who allows children in her care to be scalded with hot water. The other brother is going through a nasty divorce. Here's how sad their situation is -- the extended family is working hard to get the children into a day care environment to improve the quality of their lives. It's pretty sad when a Mississippi day care facility is seen as a cure-all.

For the last two weeks, I've had the house to myself.

I'm allowed only one computer at work now, so I had to choose between a Mac and a PC. If it weren't for the fact that I need to use a Windows-only writing setup, it would have been a no-brainer -- Mac. I ordered the Mac anyway, and used a program called VMware Fusion to install a version of Windows that runs in a separate window on the Mac. I was skeptical at first, but I'm sold on it now. If you make it fill the screen, you can't tell you're using a Mac machine. My Mac has 4G of RAM, which is more than enough memory.

Here's what I love the most about this setup. When I installed everything I needed in Windows, I took a snapshot. You know how Windows machines get bloated after a year or two, and they run slower and take three times as long to start up? On the Mac, that's not going to happen. Instead of reinstalling Windows, I can just revert to my snapshot, install updates, and take another snapshot. For what I need to do, Windows works better on a Mac than on a PC. How do you like them apples?
Posted by Bob at Sunday, May 18, 2008 5 comments:

Elden's wife Susan has cancer. She's been getting chemo treatments on and off for the last few years, but her situation has gotten much worse recently. The cancer made its way into her brain. She has only a few months to live, if that.

Some friends and I have been trying to figure out what to do to help their family. One thing Kenny did was to set up an account where Elden's many faithful readers can donate. Elden agreed to post a button on his site. I'm glad he did this. It's difficult to accept help, and it's even more difficult to ask for help. Many of Elden's readers know how generous he has been in giving away prizes, helping other cyclists in need, and pouring effort into his beloved blog. A number of commenters begged him for a chance to pay back his kindness.

We also decided to get together and do a ride this weekend. At first glance, it seems pointless. "Hey, I hear Susan's dying of cancer. Let's all get together and go on a bike ride!" It seems desperate. Or futile.

And what's wrong with desperate acts of futility?

Especially when you can talk and ride and have a few laughs. I'm telling you, that ride we did on Saturday on the ridge between Draper and Alpine will go down as one of the most memorable rides of my life. 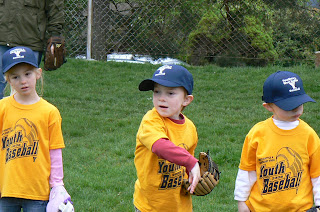 After that, it got a little out of control. Fortunately, I managed to stay out of the legal system, and we all managed to come out of our first T-Ball game unscathed.
Posted by Bob at Sunday, May 04, 2008 3 comments:

I Changed My Mind

I want Hillary to win the Democratic nomination.

I know you have questions. First, why aren't I writing as much? I'm busy at work, so whatever internet web log entry I slap together is going to be quick and dirty. Second, you're probably wondering why I changed my mind after so eloquently expressing my desire for Obama to win.

Well, this may come as a shock to you, but I don't have to defend myself. I'm like Juror #7 (Jack Walden) in 12 Angry Men. I'm sick of all the talking. That's right, you heard me. I've had enough.

No, I don't care. I just want it to end. And right now, I'd rather hear about Whitewater than Jeremiah Wright.

I remember sitting in the Democratic caucus a few months ago and hearing several people say, "We have two great candidates..." No, we don't. We have two deeply flawed candidates, at least in terms of being electable. What kind of "great" candidates would be dead even with a garden gnome who's basically running for George W. Bush's third term?

Here's an analogy. Imagine your favorite book is being made into a movie, you're in charge of casting, and you have a limited number of choices: