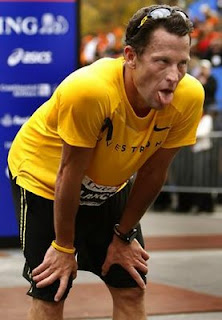 The cycling community is abuzz because Lance Armstrong will be racing the Leadville 100 this year. I'm going to complain about some of the hero worship that's going on, but first, I want to go on record saying that I think Lance is heroic. He battled back from cancer to win seven (7) Tour de France races. During one race in which he overheated and became dehydrated, he battled his pain and climbed the mountain ferociously, losing only a few minutes where he could easily have lost twenty. Granted, Lance was most likely taking performance-enhancing drugs, and we know that a bunch of his competitors were doing the same thing. Maybe Lance's drugs were better than his competitors and he had an edge. Whatever. Some of his Tour de France rides were spectacular.

Even more heroic is the Lance Armstrong Foundation. For a celebrity charity, his organization is shockingly helpful.

That said, let's get on with the nonsense. Here's what one writer had to say about Lance's resolve:

This year the race gets continued attention in that Lance Armstrong has signed up once more. The race is scheduled for August 9th so I think at this point there is a good chance Lance will show. As we all know Lance is no slouch. He has raced mtb, including at this years Miles of DisComfort 52 miler in Comfort, TX this January. Lance ended up DNF at mile 41 as a result of leg cramps. From what I’ve read, he lost his water bottles and may have dehydrated some. I don’t figure this will be a problem at Leadville. As with anything Lance attempts, he will come prepared.

Ooh, question! If Lance comes prepared with anything he attempts, why did he get dehydrated and DNF (Did Not Finish) at mile 41 of a 52-mile race?

Here's the thing. The guy retired from serious professional competition, but he can't give up competing. Deep down, he's a gym rat. He's run a marathon in under 3 hours. But he's still a retired athlete who spends most of his time running his charity and balling needy singers and actresses.

The thing I love about Leadville is that it's a race for the cycling gym rats of the world. It's a place where amateurs like me and Dug and Elden can test ourselves. For a few years, Elden was Ahab, and the 9-hour mark was his ubiquitous white whale. Dug has ridden Leadville successfully several times, but never on a rigid singlespeed. I want to get back into good enough shape to finish in under 12 hours and get my sweatshirt and belt buckle.

Before the Leadville race was around in the early 90s, Dug and I got ourselves into great shape, but we didn't have an epic way to test ourselves. So we decided to do the White Rim Trail on summer solstice in 120-degree heat, and almost got ourselves killed. Leadville changed that. Now, when we start feeling cocky about what great shape we're in, we can just do Leadville. And so can Lance.

I'm glad Lance is racing -- seeing him bomb down Columbine will be a magic moment -- but he's not racing as a professional cyclist. He's a retired cyclist. There's a good chance he won't finish.
Posted by Bob at Tuesday, August 05, 2008