How I Won $28 Betting on the Oscars 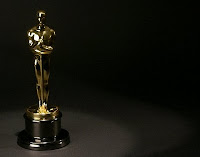 Last night we had an Oscar party. Wendy's sister's family is in town this week, and Minette and Andy came over with ballots that everyone could fill out and submit, along with a $5 processing fee that the winner processed. (I call it a processing fee because gambling is illegal, and the Feds have been all over me recently. You don't think I see those helicopters, g-men?)

I wasn't sure I wanted to fill out the predictions for three reasons -- 1) I haven't seen many movies this year, 2) some Oscar nights leave me feeling sick and sad about the movie industry, and 3) I was tired from riding the Chilly Hilly yesterday morning.

I should give a ride report, since it was an official cycling event. The Chilly Hilly is a 33-mile ride with 2,875 feet of elevation gain. To put this in perspective, if each foot of elevation gain were a piece of paper, and if you stacked the papers on top of each other, the stack would nearly be eight inches tall.

I rode from my house to the ferry, and then I rode around the well-marked course on Bainbridge Island, took the ferry back to downtown Seattle, and then rode home. It was a solid ride.

Now, back to the Academy Awards. The tricky thing about the Academy is that no one really knows who belongs to the Academy. Or at least I don't. I have the feeling that quite a few Academy members don't see all the nominated movies. They like leftist causes like the Gay Agenda and Giving a Hand Up to Black People, and they have elitist sensibilities. But above all, they want the financial success that comes from successful Hollywood movies. Oh, and many members of the academy happen to be members of the Jewish community. Did I mention that they don't watch all the movies? That's about all I know.

As I went through the ballot, I used my knowledge of the Academy to make my picks. By the way, has anyone pointed out what a weak year it was in movies? Maybe the worst since the mid-30s. The Dark Knight and Iron Man were good, but they're superhero movies for crying out loud. The Curious Case of Benjamin Button was quirky but forgettable. And Slumdog Millionaire? Ugh. I kept whispering to Wendy what was going to happen next, and I was right in every case. ("Pssst. He's not going to guess B." "Psst, the final question will be 'Who's the third muskateer?'") That movie was so predictable, and so unbelievable, and so cheesy, and so violent, that the four of us left the theater without asking, "What did you think?" We stormed halfway back to the car before someone broke the silence with, "I need a shower."

The only reason I watched Slumdog was because it was supposed to dominate the Academy Awards. You'd think I would have learned by now that dominating the Academy Awards doesn't mean a movie's great, or even good. Crash and The English Patient won Academy Awards. Try staying awake through either of those movies.

Predicting the main awards is pretty simple. I go by buzz and some simple logic. Meryl Streep is a fine actress, but it's really time to celebrate Kate Winslet. Sean Penn just won the award a couple years ago, so Mickey Rourke has a better chance to win. Needless to say, I'm not always right. It's difficult to predict what the scatterbrained Academy is going to do.

Predicting the smaller awards is even more difficult. I don't know what the difference is between Sound Editing and Sound Mixing, and neither do members of the Academy. For the foreign movies and short movies, which neither I nor the Academy members have seen, I go through a simple process. Are any movies about the Holocaust? If yes, vote for it. If the movie is not about the Holocaust, pick the Frenchiest sounding movie, because the French make fine wine, fine food, and fine movies.

In our little contest, we agreed to have a weighted scale. Best Picture is worth 3 points, Best Actor, Actress, Director, Cinematography, and a few others are worth 2 points. The rest of the awards like sound and foreign short are worth 1 point.

Early on, I took a 1-point lead over Minette, with Andy and Wendy following close behind. Kim appeared to make random guesses, and Michael apparently filled in write-in ballots, so they fell behind. Then Minette went on a roll. She got both of the Sound awards right while I got them wrong, and for some Short Film category, I picked a French movie while she picked a German movie. During the announcements, when it became apparent that the German movie was about the Holocaust, I cursed and Minette pumped her fist. She took a two-point lead.

I narrowed the gap back to a point by picking the right Slumdog song to win -- have I mentioned what a predictable and cheesy movie that was? -- and since Minette and I made the same guesses for Movie, Director, and Actor, it all came down to Kate Winslet. If she won, I won. If she lost, Minette won.

This year, instead of having one or two presenters, they decided to have five presenters, each one of whom spoke directly to one of the candidates. This was so painfully self-indulgent that I wanted to start doing the dishes. Still, I somehow managed to stay put through all the schmaltz. "Meryl Streep, you're a shining beacon unto all yada yada yada." I wondered what would happen if one of the presenters gave a real critique. "Ms. Hathaway, you're a fine actress, but you look too much like a cricket to win this award."

And the Oscar goes to . . . Kate Winslet!!! I fist-pumped my chest twice and pointed towards the ceiling. Mad props, Big Guy. I owe it all to You.
Posted by Bob at Monday, February 23, 2009