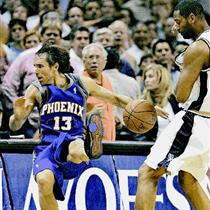 One of the advantages to writing a low-key blog is that it's much easier to write an entry about something that no one cares about, like basketball. I'm not concerned about losing readership -- excuse me, that should be loosing readership. I don't know exactly when people stopped spelling lose in a traditional way, but I'm not a usage facist. I'll go with it. Here are my thoughts on basketball.

Feel free to leave a comment. Oh wait, I turned off comments! That's because you're deadbeats, the both of you. Commenting is not a right. It's a privilege.
Posted by Bob at Wednesday, May 16, 2007