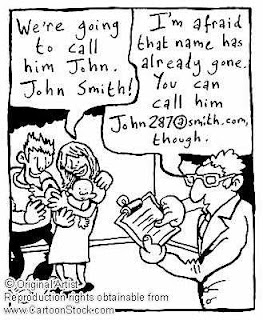 The title of this post was originally called, "My Third Favorite Poem." You see, I had read this poem on the World Wide Web of the Internet, and I swear I copied the text of the poem to the operating system Clipboard, pasted it into an electronic mail message, and sent it to myself with the Subject line, "Poem." After twenty minutes of searching while the boys tormented the furniture, I've decided that I must have imagined the whole thing and maybe experienced the poem in a dream. On the positive side, I may have imagined what I consider to be the third-greatest poem of all-time, putting me in the company of Milton and Beckett. On the negative side, I have this nagging feeling that a piece of art which once moved me is lost forever. It is at times like these when I hope for an afterlife so that I can review my life. I shall fast-forward past all the church meetings and encounters with the blue screen, and I'll stop at a time when I read this elusive poem at my computer. I hope my thoughts are part of the review, because if a review of my life ends up being recorded from a hidden camera, I won't be able to tell the difference between reading a great poem and reading a quarterly summary from Adobe's chief financial officer. I don't mean to digress too much further, for I am, in short, getting away from the topic at hand. In fact, one could argue that the topic du jour has never, in fact, been in hand. Yet perhaps this digression may find a way of moving me closer to today's topic. To be quick, Adobe's chief financial officer was named Murray. You just have to feel safe with someone named Murray.

Now, on with it! In my search for this poem that I allegedly sent to myself by way of electronic mail, I encountered something else that I had written. It is not a poem. I wrote this back when Wendy and I were debated what to name Alpha and Bravo, who have since then been renamed Luke and Max. Here it is:
10 Baby Naming Rules for Boys

1. Don't tell anyone the actual names of the babies until they are born and have already received their names. Someone will always come up with an excellent reason not to use those names, and then you have to exert confidence in the face of ridicule, which demands too much energy.

3. A dicey first name should have a solid middle name. The only exception to this rule is if you have a cool last name, like Brown or McGillicuddy. I dare anyone to find a name that doesn't sound great with either of these last names. Pumpkin Mcgillicuddy? It works! Jan Brown? The exception that proves the rule.

4. When in doubt, go with the common name. It's better for a boy's name to be common than unique. In one study, analysts gave identical papers to a set of teachers to read. Even though the papers were identical except for the names, boys named Michael and Stephen received better grades than Julius and Ian. People can always find deserving nicknames.

5. No New Age names (Zephyr, Sagitaurus, Jan), unless you want your pasty children to get beat up and then complain about the bullies' negative vibes.

6. No names that remind you of someone you've dislike (Darrel, Ian, Jan). I am now counting to ten.

8. No Utahn or African American names (LaDwayne, Tay'len, Ian). This rule is final. No exceptions.

9. The name should be versatile and dynamic (Conrad, Con, Connie, C-Rad) rather than one-dimensional and static (Jan).

10. With twins, no rhyming. Wendy's aunt named her twin boys Barry DeLane and Gary DeWayne. The only set of names more stupid than that is Ian and Jan. Unless you name your child Ian Jan: "Goodnight, Ian Jan."

Bonus Rule: For all you wisecrackers out there, names are not jokes. If you name one son Jared, don't name the other son Mahonri. The only exception to this rule is Tempus Fugit. I still have a crush on her.
Posted by Bob at Saturday, May 19, 2007