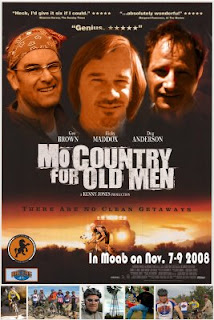 This year, I thought seriously about canceling. I blame it on Elden. He selfishly put his own needs above the needs of the group by staying home and nursing his ailing wife.

Seriously, the thought of going to Moab while Elden dealt with the heartbreaking situation at home just didn't seem fun. We bucked up and did three rides over the weekend -- Porcupine Rim, Gold Bar Rim, and Slickrock. At least 23 guys rode along. Before I give out awards based on movie quotes, I'll describe the three rides.

The plan was to arrive in Moab early enough to ride the extended version of Porcupine Rim. According to Dug, that meant riding "two miles" further up Sand Flats Road and then dropping down onto new singletrack. I know now that when Dug says "two miles," he really means SIX miles. He used the old bait-and-switch technique on us.

Not that I'm complaining. I wanted to ride six miles up a fire road. In fact, I prayed aloud that morning, "Dear Zeus and/or any other available Gods, thank you for my singlespeed bike, and bless me that I may ride it along a fire road until my legs are weary with joy, Amen."

When we finally reached the new section of trail above Porcupine, any sarcastic feelings I had were swept away as we weaved our way down between juniper trees and ledges. You'd think it would be hard to find a great new trail in Moab for someone who's been there more than forty times, but great new trails somehow keep popping up.

Unfortunately, Nick -- who had never been to Moab -- paid too much attention to us when we told him to ride soft tires on Slickrock, so he let some air out of his tires to do Porcupine Rim. To clarify, soft tires work great on the Slickrock trail, but not necessarily on all slickrock terrain. And especially not on Porcupine Rim, which probably pops more tires per capita than any other trail. Nick flatted once, replaced the tube, and then flatted again.

Since Nick was the only rider on 26" wheels, and since you can't use 29" tubes in 26" tires, Nick was out of luck. We split up. The faster guys rode down Porcupine Rim, while the Paul and Nick and I took a spur back down to Paul's car. Paul and I rode up and down the technical sections of the trail, while Nick walked his bike.

While this was a great ride providing plentiful tales of heroic moves and splendid crashes, the real story was the fact that L. Tom Burch got separated from the group, remained up on the mesa well after dark, and was finally located by the Search & Rescue team. Here's how it happened.

L. Tom is a notorious tinkerer. When most guys get to the trailhead, they put on their gear, make a few last-minute adjustments to their bikes, and off they go. With L. Tom, it's a much different story. It's not that he rebuilds his bike. I don't even know if he does more work on his bike than anyone else. I think he just stares a lot, stumbles around, and indulges in methodical nonsense.

Our group of 15 met another Utah group at the trailhead, so there were 21 guys doing the ride. (That's because there were 6 guys in the other group. Sorry I didn't make that clear.) The plan was to ride the singletrack portion of the trail, which is marked with blue paint instead of white paint. The white trail is wider and more obvious -- it's where jeeps go -- while the blue trail is for hikers and bikers. The blue trail is especially difficult to follow after the first overlook, where we traditionally meet and take a big group picture. Only Kenny had followed the blue trail after the overlook.

L. Tom was riding slow, bringing up the rear. Like me, L. Tom does not live in Utah. He lives in Iowa. I don't think it's a coincidence that we're the two pudgiest guys. A couple of guys from Lee's group seemed to be struggling, and Paul doesn't like doing long rides. There was talk of riding to the overlook and then making a decision. Anyone who didn't want to do the long blue trail could head back down and be back at the parking lot within an hour or two.

After we all posed for the annual picture, we geared up and got ready to ride. It's not like we burst into action. Most of us are in our 40s, and we move slow after getting pounded all day (see the 9:00 mark for evidence here). Paul told me he was going to keep riding. At this point, I should have asked L. Tom what he was going to do, since I had in my mind that Paul and L. Tom were heading back down. Instead, I rode on with Paul and Nick.

Dug saw that L. Tom had his shoes and helment off. "Are you coming?"

Dug assumed L. Tom wasn't coming along. When Dug told us this later, I assumed that L. Tom wanted to save face. Hey, where did everybody go? I wanted to come along, but now I guess I better ride back down. We rode slowly for about ten minutes, and then we stopped and waited another five minutes or so to make sure no one got lost. Here's the thing. Even with fifteen riders ahead of me, I still had a difficult time finding the right way to go in some places. The blue trail just isn't marked well, and the terrain is gnarly.

What we didn't know is that L. Tom decided to come along. Only instead of riding the blue trail, he stuck to the traditional white trail used by the jeeps. As he rode up and down the white trail, he could see us from below as we picked our way along the edge of the rim.

L. Tom told us later that he saw us gathered at the top of the mesa where four trails converge -- the two Gold Bar trails, Poison Spider, and the Portal Trail. According to his story, he shouted to us that he was coming up, and someone from our group shouted, "You're on the wrong trail!"

Must have been someone from the other group, because we were speculating about whether L. Tom really followed us. Paul even joked about using our comments during the forthcoming deposition in a criminal trial. And this was before we realized Lost Tom Burch was on his own.

From this point, we could have gone down the Portal Trail, which is an exposed two-mile section of trail that cuts along the side of the mesa. Every few years, a cyclist falls and dies. This time, we decided to go down Poison Spider Mesa instead of the Portal Trail.

On our way down, we took a spur to the little arch and hung out a bit. I had ridden across this arch back in the day, and I secretly hoped to show off and ride across it again. In my memory, it wasn't a big deal, but when I took one look at the arch I decided against it, not with a wife and five kids at home who might have to explain that their husband/father died while showing off. "We have video footage, but frankly, it's difficult to watch."

After goofing around at the arch, we meandered down Poison Spider Mesa. Whenever someone had a mechanical (yes, the adjective works as a noun, kind of like when sports reporters say a player is "out with a knee") -- I broke a chain, and Sleepy and Gary flatted -- a small group stopped and helped out.

We got to the parking lot at dusk. A group of drivers hopped in the shuttle car while the rest of us hiked up to see the dinosaur tracks and Native American drawings. When the other drivers got back, they broke the bad news. Tom's car was still there.

Dug felt horrible, since he took responsibility for Tom. The rest of the guys drove into town and ate dinner while Paul and Dug and I drove back and forth looking for signs of Tom. It was dark.

We didn't know at the time that Tom had a lighter, warm clothes, matches, and a flashlight -- everything but a cell phone, which was in his truck. Had I known that, I would have gone into town with the boys and gotten drunk. Instead, I cycled through the emotions of guilt, frustration, and anger. Did he try to follow us along the blue trail? Did he clunk his head somewhere? Why didn't he tell us what he was doing?

Dug called the county sheriff and met up with the guys who were to go out and search for Tom. I wasn't there, so I'll have to let Dug tell the story about one or two of the guys scolding Dug for leaving a man behind. The plan was to send a hiker up the Portal Trail and several four-wheelers along the other routes.

According to L. Tom, he was hot on our trail. He barely missed us at the little arch, and then he had a mechanical. When it got dark, he realized he couldn't find his way down Poison Spider Mesa, so he walked his bike down the Portal Trail. It was the right decision. In fact, he did everything right, except for tinkering. And riding too slow. And failure to communicate.

The Portal Trail hiker found Tom near the bottom, and radioed the news to the rest of the team. As L. Tom ate dinner with Paul and Dug and me, he felt sheepish and grateful.

The next day we did Slickrock. It was the first time I'd ever done it on a singlespeed. More on that tomorrow, when I give out awards based on quotes from the movie, No Country for Old Men.
Posted by Bob at Tuesday, November 11, 2008