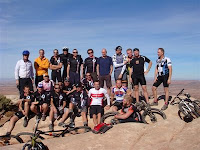 After every Fall Moab, I have a tradition of handing out imaginary awards based on movie quotes. Ergo, it should come as no surprise that I'm doing the same thing this year, as you will discover if you continue to read. And I do, in fact, command you to read.

Warning: This blog entry may not be suitable for children, Mormons, and certain wives of certain gentlemen.

This goes to ... Fatty, whose luck has not been kind of late. Hang in there. We missed you on the trip.

Carla Jean Moss: You don't have to do this.
Anton Chigurh: [smiles] People always say the same thing.

This award goes to ... Ricky, who always says the same things. And I love it. He always asks Gary about one of his old bosses from back in the Novell days. The first dozen times Ricky brought it up, the question evoked a Tourette's-style outburst from Gary. Unfortunately, it's more difficult to get Gary to bite nowadays.

And Ricky asks me the same question every time there is a campfire and alcohol. He wants me to belly dance. That's because back in the 90s, I learned how to belly dance. True story. It was Plan F in my attempt to recover from chronic fatigue syndrome. For all I know, it ended up being the cure, or maybe it was Ambien, sun meditation, or the quack scientist from Reno who claimed he had a cure for CFS and cancer (which is cause by evil spirits). I'll say the same thing to Ricky now that I've said since: "I am tired. From where the sun stands, I shall belly dance no more forever."

Anton Chigurh: That's foolish. You pick the one right tool.

This award goes to . . . the singlespeed bicycle. In Moab, it's the right tool. Since the other guys started riding singlespeeds a few years, I held out until last year, and fell in love. As a result, riding is different, maybe better. Instead of stopping every few minutes to test our skills on uphill moves, we now try moves less often, and we try more downhill moves. I like it.

I especially enjoyed the Sunday ride on the Slickrock Trail. Being on a singlespeed meant that I wasn't able to do some of my favorite moves -- like the Z move or hairlip hill -- but the overall feeling of cruising along the trail was one I hadn't enjoyed that much since I first started going to Moab. The singlespeed offers a flowing feeling that reminds me of the old "rhythm of the road" adage that roadies used to talk about. With a singlespeed, it's the Rhythm of the Trail. I can dig that.

Llewelyn Moss: What's this guy supposed to be, the ultimate badass?

The ultimate badass award goes to . . . Jeremy. Sorry, Kenny and Brad, when Jeremy shows up to ride, he's still the king -- even though he rides only a couple times a year. My favorite move was when he appeared to be struggling up hairlip hill. When he reached the top, where the "hard" line is to the right, he stayed straight and rode over the ledge, which I had never seen done before. When he caught his breath, he popped a cigarette into his mouth and smoked. Seriously. He kept stopping to take cigarette breaks.

That was nothing compared to the show he put on Saturday night, when Dug and Paul and I were out looking for Lost Tom Burch. I can't relay the nature of his report in full. Wait, why not? He said his ex-wife used to smack him around. That's hilarious. And a girl had a crush on Jeremy back in the day. Jeremy wasn't into her, so he told her he'd provide service to her only if she brought a friend along. And that's all I can say about that. This is a family blog! By the way, what's a short 'n tall stack?

I don't know who to give this award to. In years past, this award would have gone to Paul, who rode his bike only once a year -- at Fall Moab. Since he's been riding to and from the courthouse, he was on fire. The award could go to Tom because he's badly out of shape, but frankly, he already has too much hardware. Maybe I'll come back to this.

This award goes to . . . two gentlemen I cannot name. Let's call them Jared and the Brother of Jared. They decided to sleep better by taking Ambien. The thing is, you need to go to sleep right away if you take Ambien, or you end up in a weird, sex-crazed sleepwalking state. Or so I've heard.

If you're tempted to take Ambien, just say maybe.

Ellis: Whatcha got ain't nothin new. This country's hard on people, you can't stop what's coming, it ain't all waiting on you. That's vanity.

This goes to . . . Tom. We ain't all waiting on you. We'd rather have to call search and rescue than watch you futz around with your shoes. Oh, and Barack Obama is not a Muslim socialist who supports terrorists. He just wants to take all your extra cash and give it to poor people so they can buy malt liquor.

No one gets this award. For a bunch of middle-aged guys, most of us ride as well as we've ever ridden, even after leaving a long line of empties around the campsite.

On a side note, I watched this movie again, and I don't care what anyone says, the movie falls apart after the woman invites Llewelyn to drink beer by the pool. For goofballs, not showing that scene is a brave choice made by a superior artist. For people like me who enjoy good stories, it's a left turn into a drainage ditch. The rest of the movie is folk-wisdom babble. That could have been a great movie.

Wendell: It's a mess, ain't it, sheriff?
Ed Tom Bell: If it ain't, it'll do till the mess gets here.

This award goes to ... the sheriff who busted Dug's chops for having left Tom behind. Don't worry, Dug. That would have been the right move four out of five times.

This goes to ... Sleepy and his friend, who thought it was too cold to camp, so they slept the first night in the cab of a running truck and the next night in a comfy hotel room. Oh, was something wrong with 25-degree weather?

By the way, when I showed the boys Nick's videos (Part I and Part IA), one of them asked who made a nice move up a steep ledge. When I told them who it was, they laughed so hard they were shaking. "Sleepy! Is that his real name? Sleepy? Sleepy!"

Every time Sleepy came back into view, both boys yelled, "Sleepy!"

Anton Chigurh: You know how this is going to turn out, don't you?
Llewelyn Moss: Nope.

No award. It just wanted to include this quote because that phone call was my favorite scene in the movie.

Llewelyn Moss: Yeah, I'm going to bring you something, alright. I decided to make you a special project of mine. You ain't going have to come looking for me at all.

This award goes to ... L. Tom! Nice try, letting us get ahead of you so that you could surprise us. It would have worked if you had the ability to pedal your bicycle faster.

Carla Jean Moss: And what are you going to do?
Llewelyn Moss: I'm fixin' to do something dumber than hell, but I'm going anyways.

This award goes to ... Cori. Whenever he rode down a section of trail that would give a mountain goat pause, he let out a whoop. His luck held out better than Llewelyn's.

Boy on Bike #2: Mister? You got a bone stickin' out of your arm.
Anton Chigurh: Let me just sit here a minute.

This award goes to ... Dan, who gashed his leg with a chain saw a couple months ago, nearly died, and thought seriously about coming along anyway. Then I assume he just sat there a minute and decided against it.

Llewelyn Moss: You keep runnin' that mouth I'm gonna' take you in the back and screw ya'.
Carla Jean Moss: Big talk.
Llewelyn Moss: Keep it up.

This award goes to ... Brad. What do you want from me? Does there have to be a reason for every award? Brad gets this award because he deserves it, end of story. Got it? Sheesh.

Carla Jean Moss: Fine. I don't wanna' know. I don't even wanna' know where you been all day.
Llewelyn Moss: That'll work.

This award goes to all the guys who, upon hearing that Tom was lost up on the mesa, ate dinner at Moab Brewery, headed over to Woody's Tavern, and then drank and told stories around the campfire. That'll work.

(And yes, I'm jealous that I missed most of the campfire stories.)

This Lifetime Achievement Award goes to ... Dug, who probably has this conversation every time he goes on a ride. I'm not saying he's an uxorious mollycoddle. What gave you that idea?

This goes to Kenny, who rode his heart out all weekend. Kenny, you're the ultimo hombre. Yo tengo un cuaderno rojo en mi pupitre.

Carla Jean Moss: I got a bad feeling, Llewelyn.
Llewelyn Moss: Well I got a good feeling, so that should even out.

This goes to ... all the women back home who watched the kids while we were gone. As we sit in chairs around the campfire and boast of our sexual prowess, we often don't give you enough credit.

No one gets this award, because all the stories that were told, including Jeremy's, were absolutely, 100% true.

This award goes to ... Rick S. who is quietly one of the funniest people I know. An example or two would be a nice touch, but you're just going to have to believe me. In other words, you should have been there.

Ed Tom Bell: Yea. Got some hard bark on him.

This award goes to ... Nick, our mate from Australia had never ridden on slickrock before, nor had he dealt with a bizarre bunch of Utahns. Not only did he make it through the weekend, he seemed to enjoy himself. He must got some hard bark on him.

This award goes to ... you, the faithful reader, who made it all the way to the end of this entry oh so obediently.
Posted by Bob at Thursday, November 20, 2008