A friend forwarded me this post called "Call of the Year." Even though I knew what was going to happen, I still got chills. 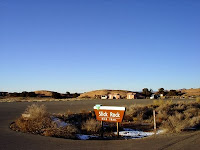