I just found out that my best friend's wife's cancer has returned. She went through chemotherapy treatments a few years ago for breast cancer, and they thought she was cured. But now the cancer has returned and spread to her bones, spine, and lymph glands. I don't have anything to say about it, other than it's awful to think about. Elden and Susan have four kids: two teenage boys and 5-year-old twin girls. Susan, if you're one of the three people who reads this blog, my thoughts are with you.
Posted by Bob at Tuesday, April 24, 2007 1 comment: 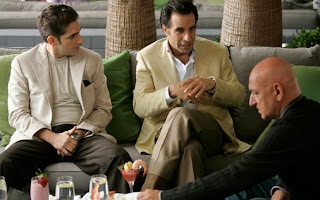 There are three main reasons I started this web log (aka, "blog"):

So here we go. Taxi Driver. Travis Bickle. It's hard to call anyone a loveable psychopath, especially in light of the misfit who recently went on a killing spree at Virginia Tech, so let's just call Mr. Bickle likeably unstable. Upset about all the scummy low-lifes he sees on the streets, he's helpless, hapless, and utterly alone. In one great scene, Travis makes a stab at fitting in by taking a Senator's campaign worker on a date. Unfortunately, his idea of charming her – taking her to an X-rated movie – is pathetically unsuccessful. You don't know whether to laugh or cry. This leads to my favorite scene in the movie. Travis is sitting alone in his apartment watching American Bandstand while idly holding the barrel of a handgun near his forehead.

The loneliest character in the history of movies is not only watching television alone, but he's also watching young people dancing together to the Jackson Browne's song, "Late for the Sky." The American Bandstand clip is perfect, from the pan & zoom to the empty shoes lying on the floor to the black men dancing with white women during the racially charged 70s to the song's lyrics:

You know, there's just no place for a weirdo who despises weirdos. It's a perfect scene.

Belated Answers to My Parents' Questions 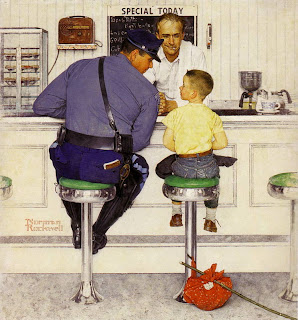 Now that I'm almost 45 years old and I have two sons of my own, I think it's high time to answer some of my parents' questions.

1. If your friends jump off a bridge, would you jump too?

I'm going to need a little more context to answer that question. If my friends were jumping to their deaths as part of a suicide pact, I like to think that I would find a way out of the arrangement. If a herd of rhinoceroses are charging my friends and me, I may very well follow my friends over the bridge railing. How tall is the bridge? Does it span water?

2. Don't you know that children are starving in Africa?

I compartmentalize my willingness to eat lima beans and my desire to contribute money to African food programs. I think you should do the same.

That won't make any difference. I'm still going to pinch my sister when she claims Jimmy Carter would be a better president than Gerald Ford. I can take whatever something you give me to cry about.

4. Isn't it about time you started taking some responsibility around here?

This answer hasn't changed. No.

No, I was born in a hospital, but you already knew that. I think this was a rhetorical question designed to make me feel silly for leaving the door open, so let's address that issue. Frankly, I don't mind leaving the door open. If flies come in the house, we can catch them and convert them into ants. If you're worried about excessive climate control expenses, I don't mind paying the bills with the money that grows on trees.
Posted by Bob at Tuesday, April 17, 2007 2 comments: 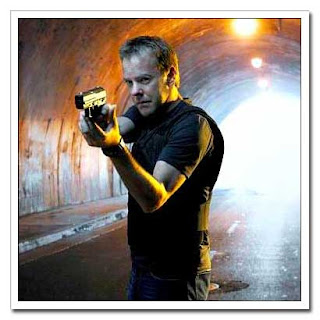 Many people have been recommending the show 24 to me. I've been curious for years, ever since networks advertised the new show starring Kiefer Sutherland. At first I thought, Wow, Kiefer Sutherland's career must really be in the dumps. What's next? A Lifetime movie? But he's entering his sixth season of a popular, Emmy-award winning show. Go figure.

My brother-in-law and nephew are obsessed with the series. In fact, Michael went out and bought the DVDs. That's something I admire. If I'm interested in a TV series on DVD, I'll work my way down a list: A) the library B) cable reruns C) Netflix D) the video store. Notice that "E) purchase at Best Buy" doesn't even make my list. I'm genuinely unable to spend $75 a pop for a single season of a TV show that I only want to see once, but I admire anyone who can. Instead of fussing around, Michael wants something and gets it with little fuss.

Anyway, I watched a few episodes of season 5 over the weekend, and I can see why people are riveted. The show moves quickly from intense scene to intense scene. And even if the scene isn't really intense, the drum beats in the background or the fact that Kiefer Sutherland (Jack Bauer) is always either whispering or yelling makes it intense. It seems like good mindless television for late-night viewing. OK, we're in. Michael agreed to loan us his DVD collection.

But then I saw a couple of episodes last night that may have turned me off forever. Jack Bauer hijacks a plane so that he can obtain a confiscated tape that records the current President of the United States admitting that he assassinated the previous President of the United States. So far, so good. Jack knocks out the flight marshall with one punch (no one notices), knocks out another guy and drags him down to the baggage hold (no one notices). Again, fine with me. I was drinking beer and scratching nuts, willingly suspending the big D. Then, after a flurry of exciting scenes that force Jack to break into the cockpit, he obtains the tape.

This is when it all fell apart for me.

The President is desperate to get that tape, so he agrees to shoot down the plane. Jack has the tape in his hand and he's talking to various people on his cell phone to work out a way to evade the F-16s. Here's what I said aloud: Why doesn't Jack just call someone and play the key part of the tape over the phone? More excitement, more drumbeats, more whispering/yelling. Emergency landing on an L.A. freeway. Daring escape. Why don't you just save everyone trouble and play the tape on an answering machine? So Jack gets back to safety and announces a big press conference, but . . . some bad guy sneaks in and erases the tape before he could play it in front of everyone! No one made a backup copy! This causes Jack to alternate between whispering and yelling.

I can take that kind of frustration in a bad horror movie, where people are disappearing and the last woman in the house hears a strange noise in the basement. The why don't you just get in your car and drive like a bat out of hell aspect adds to the horror as you watch the woman light a birthday candle and descend the stairs. But Jack Bauer saves the world regularly. He should know better. Of course, that's not how I process it. When I'm frustrated by the why don't you just... angle, I move away from the characters and think about the writer. That's no good. I think I'll play online Boggle while Wendy watches 24.
Posted by Bob at Tuesday, April 10, 2007 4 comments: 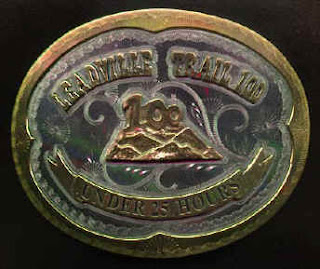 So here are my goals. I want to weigh no more than 170 pounds by race time. I want to be in good enough shape so that if I ride well under good conditions, I can finish in under 12 hours.
Posted by Bob at Thursday, April 05, 2007 5 comments: