RAWROD 2014—Ride Around White Rim Trail in One Day


When adventure writers tell their stories, they start with the dramatic ending.


May 3, 8:30 PM - After riding the White Rim Trail in one day, Paul decides he's done riding for the weekend and starts the drive home to St. George. He pulls over and dry heaves.

May 3, 9:00 PM - After riding the White Rim Trail in one day, Dug and his son Holden drive into the parking lot of Moab Brewery. Holden tells Dug to stop the car, now. He opens the door in front of the overflow crowd waiting to get a table at the restaurant, and vomits. The crowd looks on in horror.

May 3, 11:15 PM - Dug and Holden return to camp and climb in their sleeping bags, waking me up from a happy slumber. Dug warns me that Holden has been sick. He tells Holden to use a bag of donut gems in case he needs to vomit. Holden uses it. He continues to wake up and vomit into different containers over the course of the night.

May 3, 11:30 PM - The last pair of cyclists complete their ride in the dark with little fanfare. Everyone else is asleep or dealing with sickness.

Kenny has been hosting this event for years, but this year was special—his 50th birthday. He was also doing something different this year. No sag wagon, and no group really. The only plan was to meet at Musselman Arch for photos, and then everyone was on their own, or hopefully in pairs. 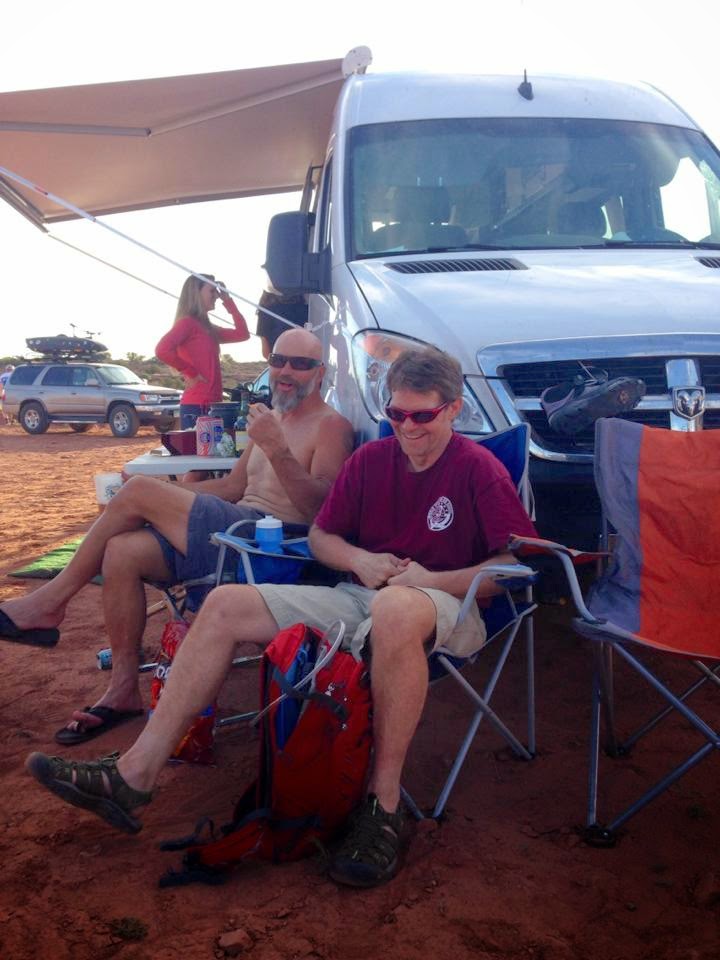 We knew the next day was going to be a hot one, so we loaded up as much water as we could carry. My backpack had two one-liter bladders and a few gels and nut rolls, and my bike carried two bottles. I stuffed other food packets in my jersey pockets.

The goal was to leave at 7:00 AM. I wanted to take off a little earlier than everyone else because I'm one of the slower riders, but that was ruined when I woke up sluggish and wandered around like the camp idiot.

I was glad to hear that Paul decided to make a go of it. After the previous day's ride, he had lost some of his confidence and wasn't sure he wanted to try it.

On the ride from the Horsethief parking lot back out to Highway 313, I felt weak and uncomfortable under my heavy pack, but happy to be with friends and doing a ride I hadn't done in almost two decades.*

* In truth, I've never actually done the full 100-mile ride before. We always skipped the 13-mile stretch of dirt road.

When the 13-mile stretch of rolling dirt road ended, we gulped down cached drinks and headed up the 8-mile paved road towards the National Park camp entrance.

It was at the camp entrance where I had perhaps my finest moment of the day. My performance in the outhouse was nothing short of spectacular. The golf equivalent would be to bend a 3-iron from the deep rough around a tree and to within 10 feet of the pin. As I emerged from the outhouse, happy and light, I raised my hand in a polite yes-I-acknowledge-your-applause-and-I'm-secretly-thrilled-but-want-to-act-cool wave to my imaginary audience, who really had no business being there, imaginary or no.

Because of my majestic delay, we were now behind the other riders by several minutes. Entering Shafer Trail reminded me of how beautiful this area was. 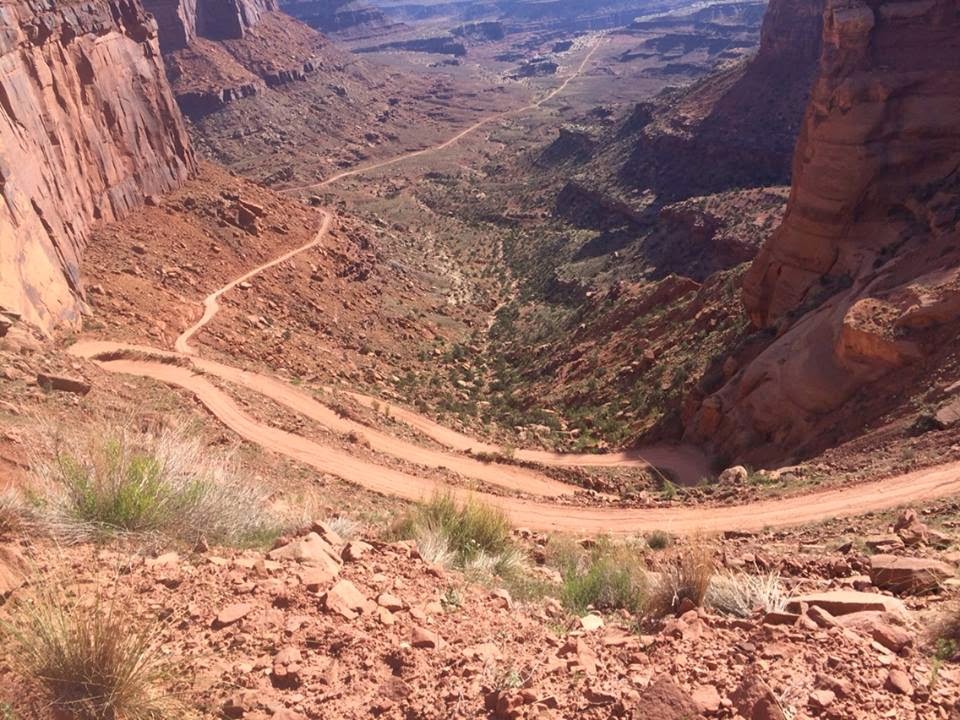 As I started the Shafer descent, I noticed that my front brake wasn't working. Elden had loaned me his rigid single-speed bike for the trip, which is kind of him, but the bike wasn't in great shape. One of the bottle cages was broken, the rear tire was bald, and the power brake was out. I normally wouldn't say bad things about Elden's loaner bike—mouth, meet gift horse—but Elden frequently disguises his generous heart with vile meanness. For example, after the ride, here's what he texted me:

"it was great to see you -- bummed i didn't ride a ton with you, but i am far too strong to hold back at your pace"

Not wanting to fly off any of the switchbacks, I did a slow descent, skidding wildly around corners with only a rear brake and bald tires.

Paul and I met up at the bottom and rode hurriedly at a leisurely pace, if that makes any sense. We arrived at Musselman Arch to see other riders hanging out. Someone in our group took this picture. 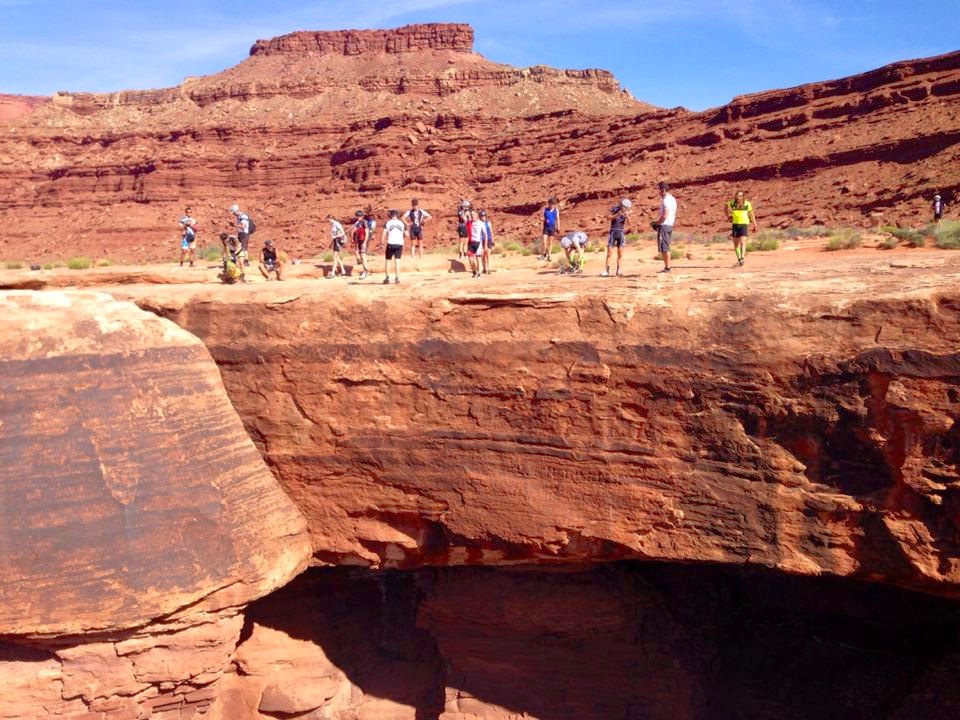 After a couple of group photos and general milling around, we got back on our bikes. That was the last I saw of the Kenny, Heather, Elden, Lisa, and the rest of the fast riders.

The flowers and cactuses were blooming. At around 10:30 AM, it was already hot. Here, I turned around for the camera to capture the purple flowers, which unfortunately got washed out in this picture. 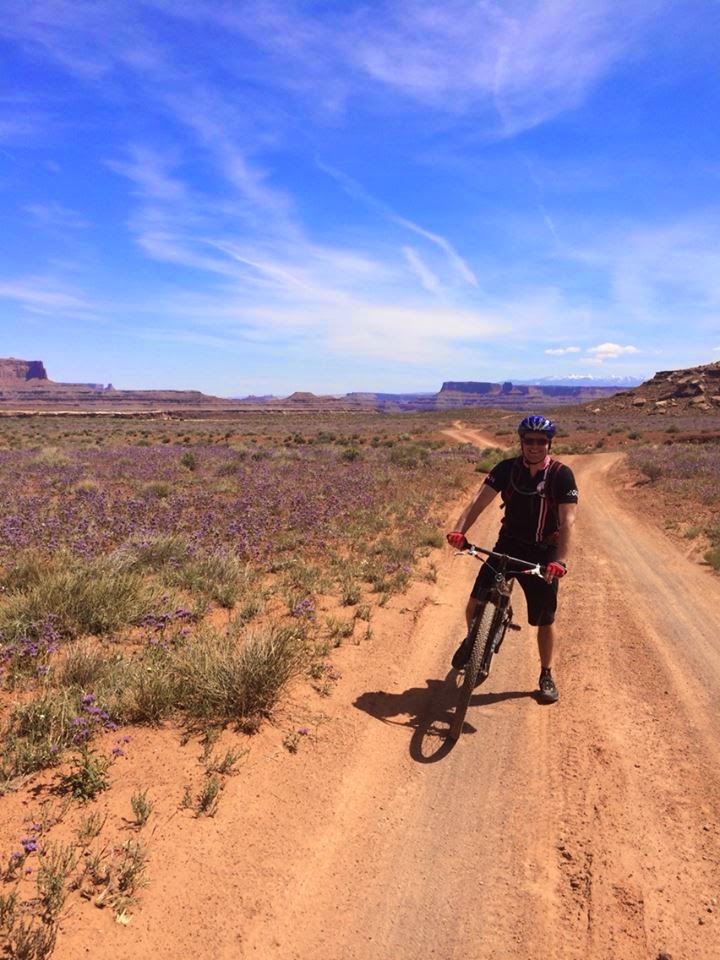 Once we finally got around that last mesa that we had been looking at in the distance for hours, we biked through a wide open desert. As we made the turn and headed northwest, I noticed a nice breeze coming from the south.


In my memory, the major checkpoints—Shafer, Musselman, Vertigo Void, Murphy's Hogback, Hardscrabble Hill, and Horsethief—were spread out fairly evenly. In reality, Shafer and Musselman are close to each other, Vertigo and Murphy's are only a mile or two apart, and there's a huge distance between Musselman and Vertigo.

The tentative plan was to eat lunch at Vertigo Void, but several of us weren't riding fast enough for it to make sense to wait that long. Paul and I ate our lunch in the slim shade of a juniper bush, and pressed on.

By the time Paul and I reached Vertigo Void, the other riders were gone. Here's what they had been up to: 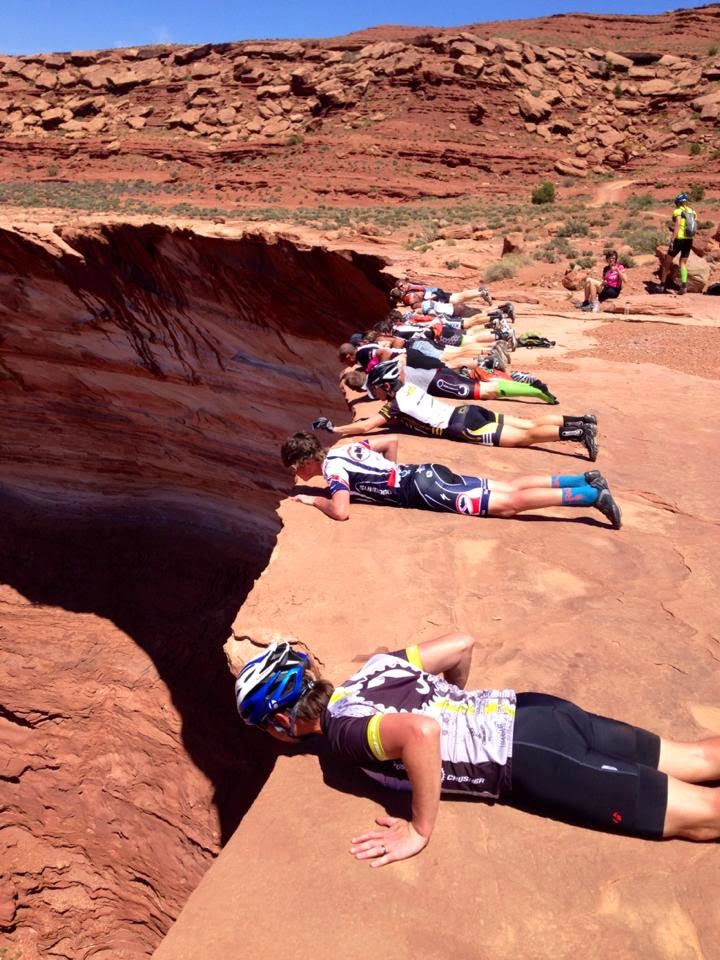 Paul wanted to keep pushing on, knowing that we had three difficult climbs in front of us, including Murphy's Hogback in a short while.

The ride up Murphy's is steep and loose. Paul and I didn't even try to ride up the steep pitches. When I last did the White Rim Trail back when Bill Clinton was POTUS, Dug and I took pride in being able to clean all the moves. Now, I thought, How did I ever ride up that? In retrospect, I am in awe of my 32-year-old self. In fairness, my 32-year-old self was riding a geared bike with suspension, not a rigid single-speed. So I'm proud of my 51-year-old self as well. Good job, mes present and past.

Cori then proposed to Emily at the top of Murphy's Hogback. She accepted.

I thought that group of people represented the last of the pack (the gruppetto for you Tour de France fans), but it turns out that a couple of riders were even further back.


There was a nice long drop down the other side of Murphy's Hogback, and then there was, for me, the most difficult part of the ride. It was hot, 90-degree weather. We had been on our bikes all day long. Eating was hard, and Paul stopped trying to eat altogether, relying on CarboRocket for his energy. CarboRocket, where energy meets experience. CarboRocket, a boost of freedom. CarboRocket, for her pleasure.

The heat was getting to me. I was weary, colicky, and dragging behind Paul, Cori, and Emily. I talked Paul into stopping so that I could transfer water from one bladder to the other and down some ibuprofen, and Cori and Emily pulled ahead for good.

For the next stretch of trail, I don't remember much. For me, every endurance ride has the same characteristics:


Riding near Candlestick, I was dealing with the crux fatigue, which Dug calls the "cave of pain." I didn't bonk, but I was miserable. I was saddle-sore, my feet hurt, my neck hurt, my legs were cramping.

Jolene's group of riders caught up to us at the start of Hardscrabble Hill. Paul and I again walked our bikes up, relieved to be off the saddles.

Bry also caught up with us and told me he was running low on water because he was giving it all away to an embattled friend. I told him I had plenty of extra water, so I filled one of his bottles with CarboRocket.


Once we got to the top of Hardscrabble Hill, where you can look down at the trail as it runs along the Green River, everything turned around for me. The ibuprofen had finally kicked in, so my neck pain was mostly gone, and I had adjusted to the suffering. All I needed to do was keep riding another 11 or so miles along the Green River before the big finish up Horsethief.

Here's a picture that Paul took of me with my camera. I rode down a bit and then rode back up to face the camera: 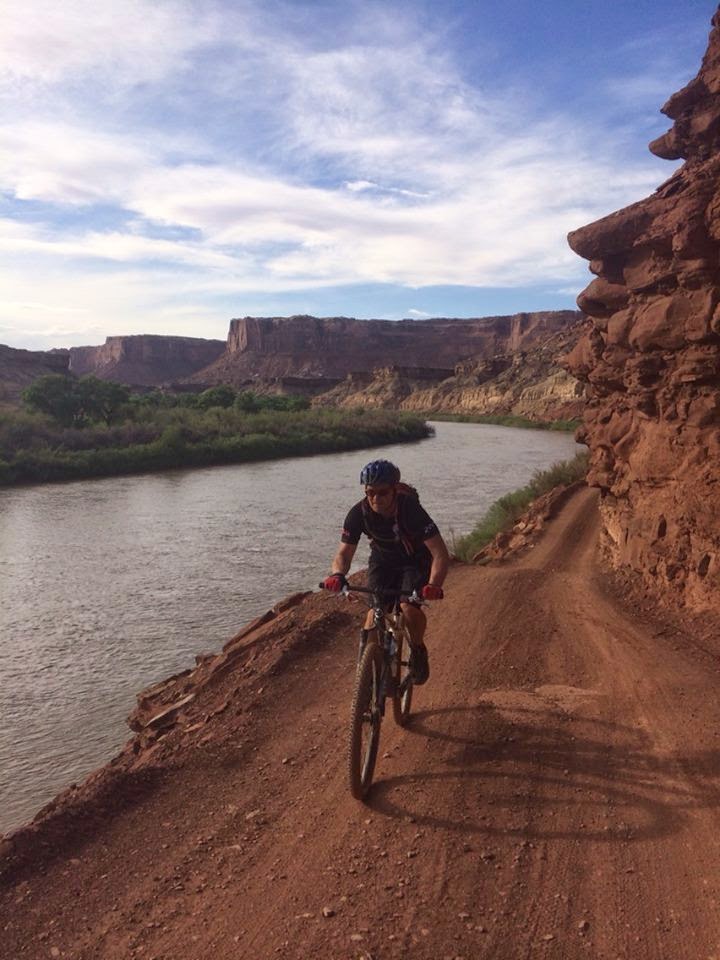 This was a beautiful section of trail. We got a nice cloud cover, a tail wind, and cooler temperatures as it approached evening.

Paul had a GPS on his bike, so we knew exactly how far we had to ride before the start of Horsethief. That helped us avoid wondering if the turn-off was right after this next bend, or maybe the next one. We knew we still had 7 miles to go, or 4 miles to go, or 2 miles to go. Horsethief is at mile 99, period, end of story. And then it's 1.5 miles of climbing.

Here's a picture of Horsethief that Todd Winner took. 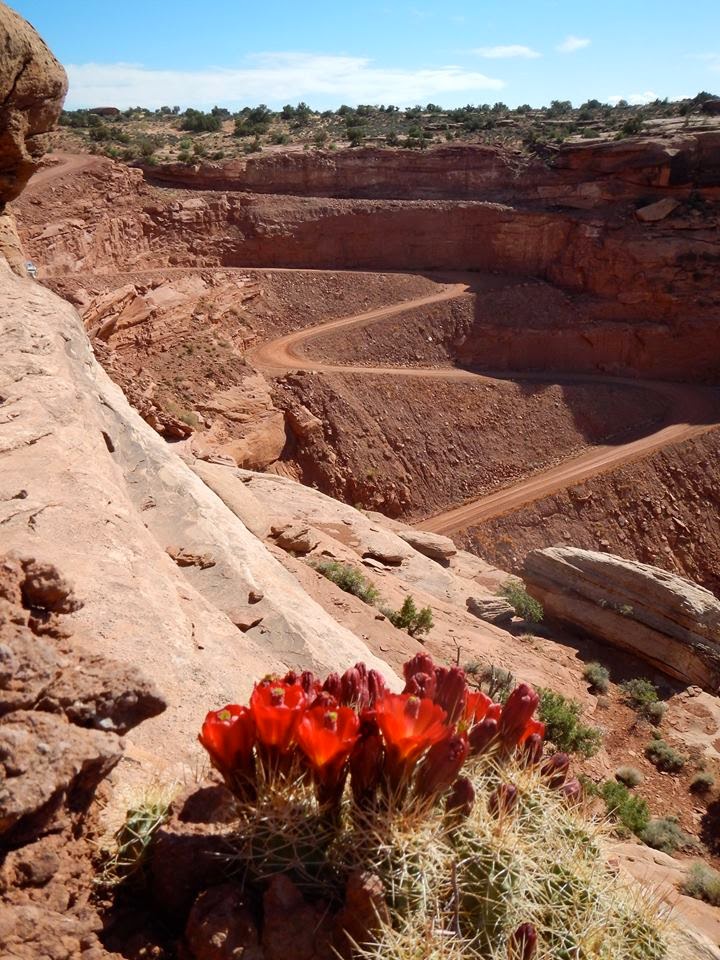 After Elden and Lisa finished their ride, they jumped in their car and drove down to the bottom of Horsethief to help struggling riders. They asked Paul and me if we needed extra water, or if they could take our camelbaks, but we both declined stubbornly. We did agree to gulp down an ice-cold Coke that Lisa fished out of a cooler.

At the top of Horsethief, the riders who had finished sat in chairs at the top of the hill, watching, cheering, cajoling. 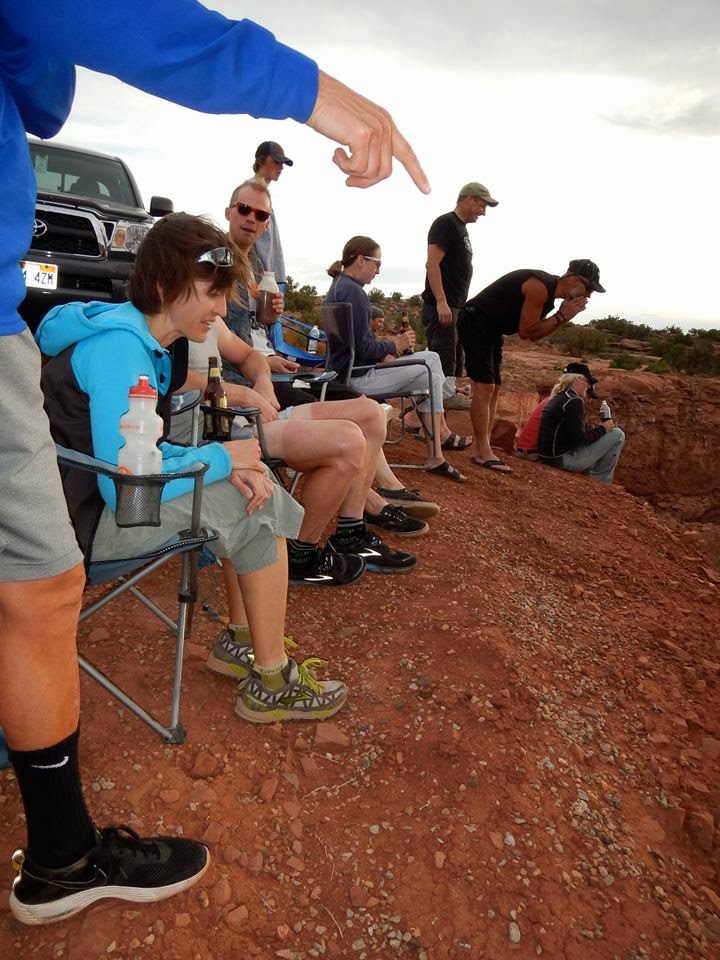 I decided that I wanted to try to ride up Horsethief. I let some air out of the bald rear tire so that I wouldn't have to stay seated to avoid skidding out and hammered up the first long stretched before it turned into switchbacks. Sadly, I had to push my bike up a couple of stretches. I like to think that I would have made it had Elden loaned me a better bike.

Then I rode up the last few switchbacks, doing everything in my power—including what Dug called the "paper boy"—to stay on my bike. Dug took this picture of me. I think that's Paul a little further down the hill. 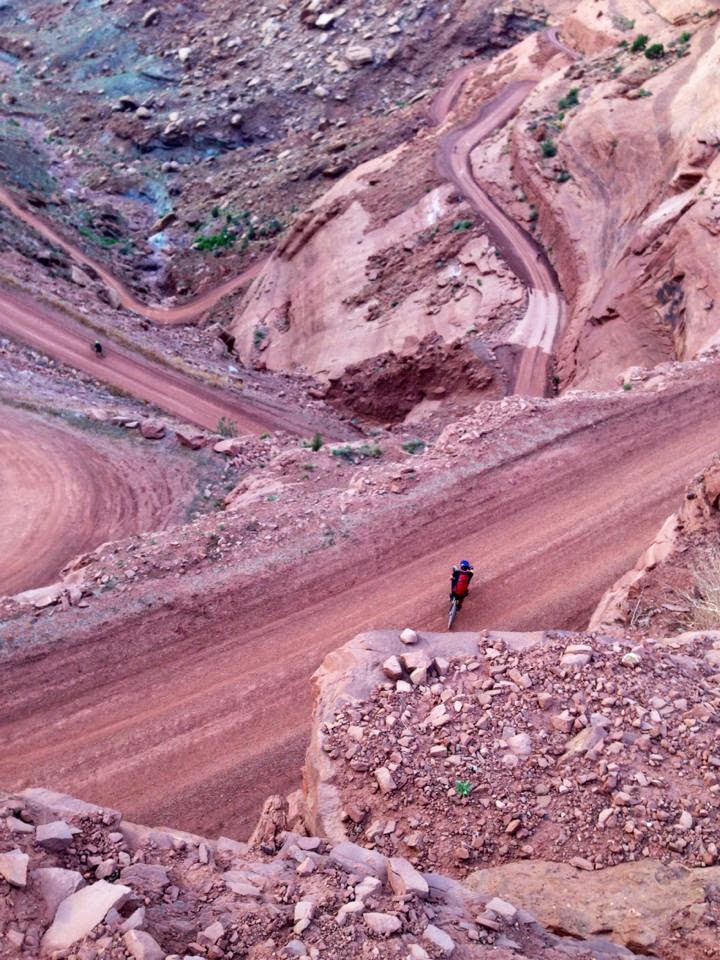 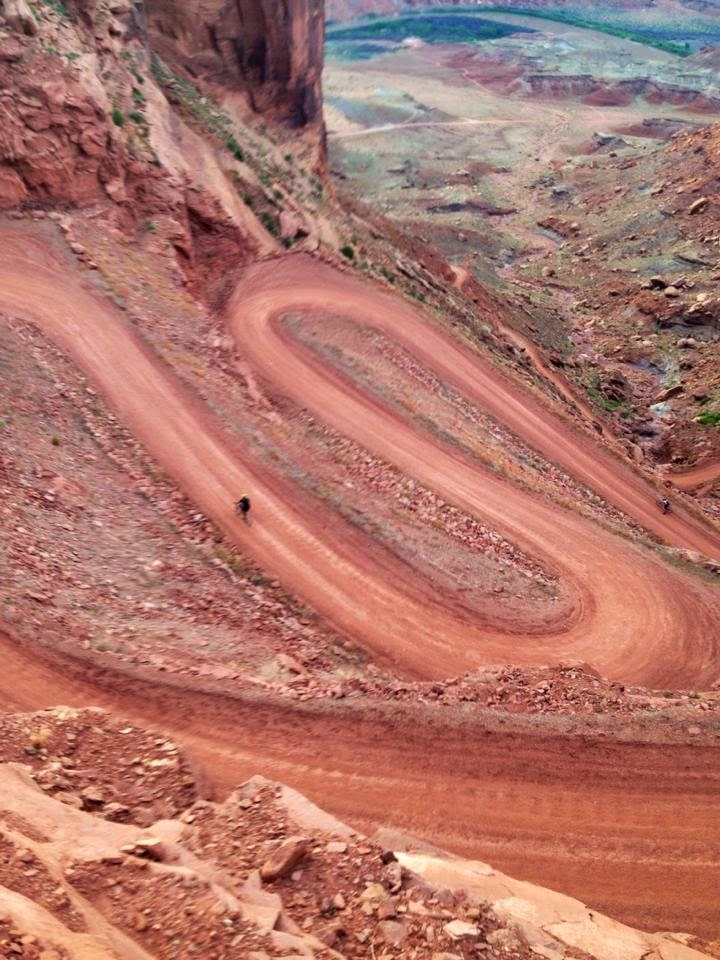 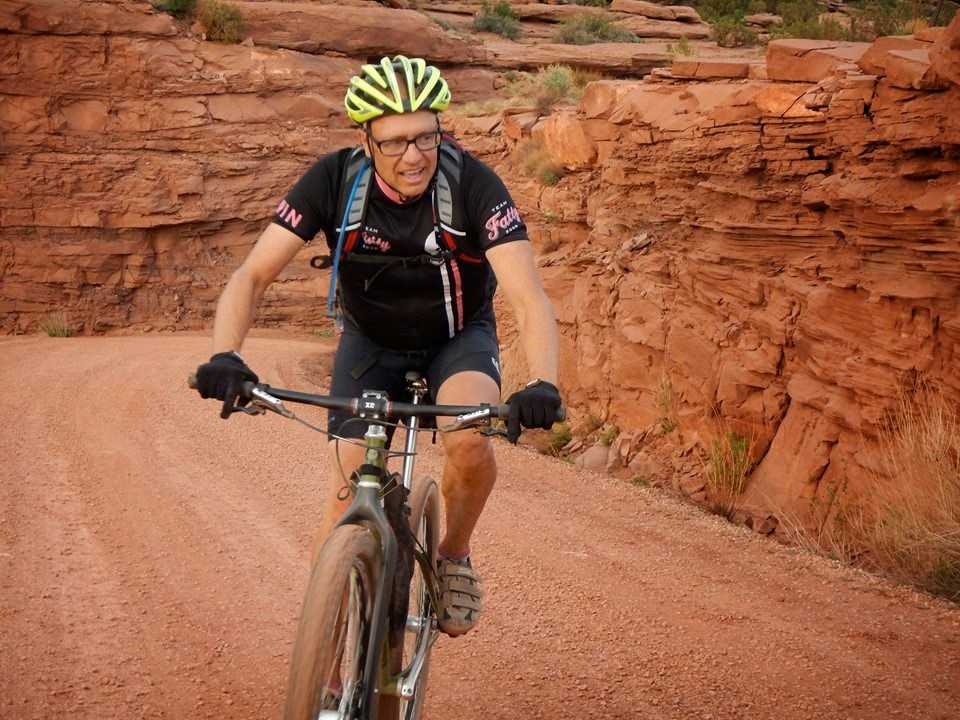 And here's me the morning after the ride: 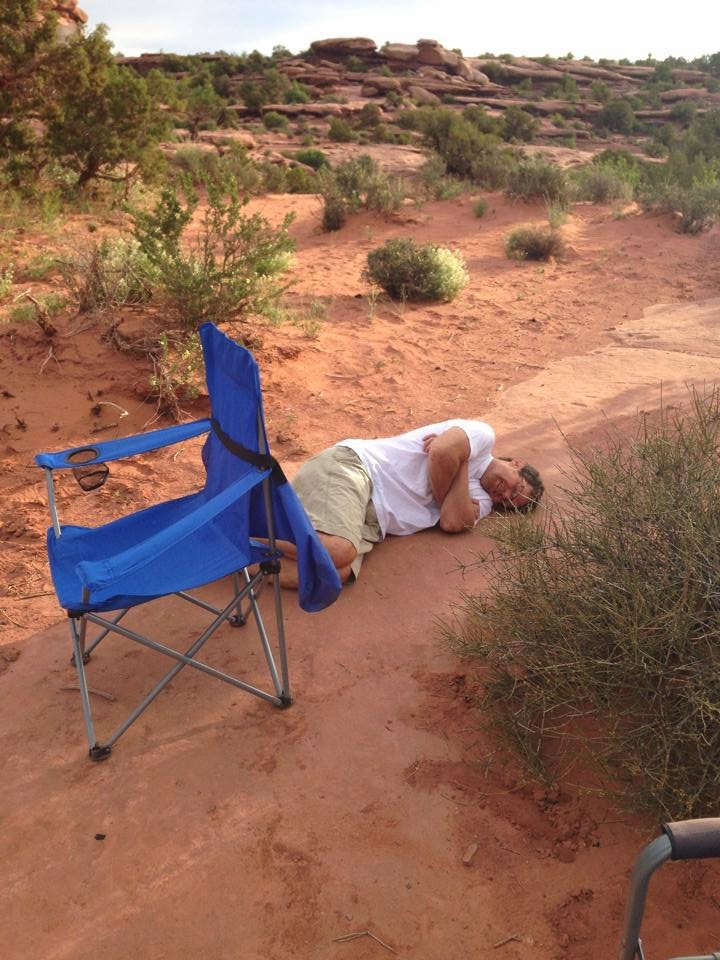 Special thanks to Kenny, Heather, Dug, Elden, Lisa, and Paul for all your help.
Posted by Bob at Tuesday, May 06, 2014