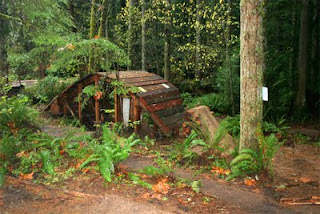 Wiffleball
In the Adobe Seattle Wiffleball league, our team is off to a solid 6-0 start, recovering nicely from a crushing defeat in last year's finals. So far, we have given up only 1 run all season, and we won our last two games -- both against two of last year's semi-finalists -- by a combined score of 17-0. In sports lingo, we are a "juggernaut," which in German means "blitzer of plastic kriegs."
On Tuesday, we play the only other undefeated team in the league. Their matching 6-0 record is deceptive in that they have won several close games against the league's doormats. I do not fear them. My prediction: our team will overpower them. We are, after all, a juggernaut in the truest sense of the word.
I will admit, however, that we will be vulnerable in the playoffs, specifically against one pitcher whom I'll refer to only as "Mike." We won a 1-0 game against Mike's team earlier in the year. Hardly convincing.
Politics
Assertions:
Look at the facts. At the end of the Clinton presidency, we were running a surplus.1
When Bush and the Republicans took control, they wiped away those gains, started two expensive wars, and cut taxes, with the tax cuts heavily favoring the wealthy.2 Their intense deregulation and lack of oversight heavily contributed to the housing bubble and meltdown. In 2008, Obama was elected. 3 Since he took office, Republicans have thwarted the Democrats in every attempt to revive the economy.4 In 2012, a Republican will likely be elected President because -- get this -- the economy is so bad that we need change.5
1 Remember the debate in the early months of the Bush presidency about what to do with the extra Social Security money being generated? Guh.
2 "Deficits don't matter." - Dick Cheney
3 In retrospect, I wish Hillary had been elected. I can't see her getting punked like this.
4 "We've got to get this deficit spending under control no matter what the cost." - Random tea bagger
5 The Republicans are absolutely correct in assuming that voters will think that Obama caused this economic crisis. The "liberal media" will try to set the record straight by saying that both parties are equally at fault. The reality is that one party caused the economic crisis and has battled the other party's efforts to help the recovery, and the other party is at fault only in its political incompetence.
Mountain Bicycling
Nick came into town from Australia, so I dusted off the mountain bike and did a couple of rides. First, we did Tapeworm, and then we did Volker's Loop/Duthie. The second ride has officially cracked my list of Top Five Mountain Bike Rides. Here's the list:
1. Gooseberry Mesa - near St. George, Utah
2. Tibble Fork - American Fork Canyon, Utah
3. Gold Bar Rim - near Moab, Utah
4. Slickrock - near Moab, Utah
5. Volker's Loop/Duthie - near Seattle, Washington
Sorry, Porcupine Rim and Little Creek, you're off the vaunted top 5 list.
This new addition starts with a long grunt of a climb that I can barely do on a singlespeed when I'm in solid shape. Then there's a long bobsled descent followed by rolling climbs that take you up to Duthie. Duthie is a mountain bike park designed for all levels. When you're done playing in the different sections of Duthie, you go back out the way you came.
-
Posted by Bob at Sunday, August 07, 2011 No comments: