I Guess That's Why They Call It the Blues

The last time three times I went biking in Utah, I came back with some sickness or injury—flu (Fall Moab 2013), heat exhaustion (RAWROD 2014), broken hand (15 minutes into Fall Moab 2015). This year, for Fall Moab 2015, I told myself that I was going to come back healthy. After all, I had only been on one mountain bike ride since breaking my hand, and that was an hour-long ride with Wendy and the boys.

For the Friday ride, I vowed that I ride clean and easy with no falls. I did just that, and it felt terrible. Perfectly terrible. For the first time, whenever I saw Kenny or Cori* try a move that I could possibly pull off, I stood back and watched.

* Not a typo. His name is Cori, not Cory. Cori is short for Coriantumr, who is a character in The Book of Mormon.

It hurt to ride that way. Outwardly, I probably looked calm to the other guys. Inwardly, I felt like I was putting my hands on my hips and exclaiming in a squeaky voice, "Oh my goodness! I do NOT want to try a move like THAT, or might might FALL and get HURT!" Or maybe my inner voice was more like Marvin the Martian's: "This ride makes me so very very terrified."

On Saturday, I battled for a few hours just to keep up with my friends on a smooth, flowing downhill section from the top of Gemini Bridges down to the start of Gold Bar Rim.

Once we got on Gold Bar, I decided to stop riding like a sissy and go back to riding like an idiot. I made a couple of nice moves that had given me problems in the past few years, including this one, where you ride up a scramble, turn left and plow over some rocks, make a hard left turn, and ride along a narrow pucker ledge with a 6-foot drop to the left. I was feeling good, back in my element. We got to the blue dot trail, where the trail itself is so difficult that some very good riders need to get off their bikes and walk about half of it. Of course, Kenny, Cori, and Ryan rode all of it, and Dug, Ricky, and Brad rode most of it, while Elden (he of the 8:12 Leadville time) and I walked a lot.

For one downhill drop, a combination of boldness and fear fatigue got the best of me. I planted my front tire at the bottom and crashed hard. It wasn't really an endo because with an endo, you go over your handlebars. I went through my handlebars.

For about 15 seconds, I wasn't sure how injured I was. Based on the level of pain, I seriously considered the possibility that I had broken my femur. That's a helicopter ride. I was finally able to move my leg. Whew. No injury. I finished the ride with some difficulty, and I even did most of the Sunday ride before the pain and fatigue got the best of me and I broke off early.

Fast forward 10 days later. I had been riding my bike gently to work, but my thigh was purple, swollen, and numb. I limped to a karate and couldn't wait for the class to be over. That's it, I decided. No more exercise until my injury heals.

Fast forward 4 days later, with no exercise in four days. I was sad. Depressed. Blue. Gloomy. Disconsolate. All I wanted to do was sleep. That kind of feeling usually hits me only once every couple of years, usually on a Monday in mid January.

The swelling is down, my thigh isn't as numb, and the doc says it's fine to ride my bike again.

I just realized that this has been entirely about me. Me, me, me. How are you doing?
Posted by Bob at Monday, November 30, 2015

[One guy tells a long story about visiting an acquaintance who lives in a big house in a wealthy neighborhood.]

"I don't know real estate but I'm guessing this is a 7- or 8-million dollar house."
"I feel weird in places like that."
"Me, too.”
“I usually try to sneak off somewhere and steal something like silverware.”
“I’ll burn a cigarette in the carpet.”
“And then pee on it.”
“Right, but just a little bit, so that the smell isn't too obvious.”
“I don’t like it when the owner follows me around the house.”
“Am I a guest or a fugitive?”
“And then I'll pull out a check book and say, ‘How much for that lamp?’”
“What do you mean it’s not for sale? Everything is for sale.”
“Everything is for sale!”
“And then I soil my pants.”
“That changes the subject.” 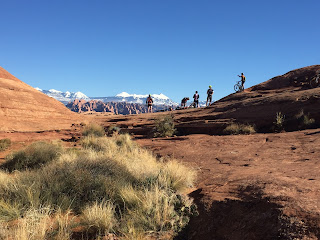 [While getting ready for an all-day ride.]

[In the car, one guy tells a story about family struggles. The second guy follows with an even more heartbreaking family story.]

[Third guy] “Hey, have you guys seen the second season of Fargo?”

[While a rider is dropping down a series of steep ledges, he shifts his weight behind his saddle and snags his shorts, trapping him. With each drop, he slams his groin into the back of his saddle, racking him.] 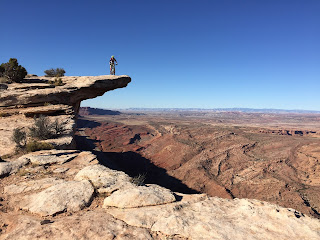 [One rider attempts a ledge drop that requires speed. The rider gets his wheel stuck, endos, and crashes hard. He lies crumpled on the ground during that brief period of time when no one knows the extent of the injuries, including the guy who just crashed.]

[Different rider in concerned voice] “Let's get his pants off.”

So I was riding my bike to work, casually, listening to an audiobook. (I'm on the fifth book of the Game of Thrones series if you're really curious.) Whenever I listen to an audiobook, I don't ride particularly fast or hard. I cruise along.

A woman wearing full-length jeans and a backpack passed me. Again, I wasn't riding hard, you know, because of Westeros and the coming of winter. The woman had to stop at a red light, and I pulled up next to her. A train was crossing parallel to the road we were riding on, so I paused a moment and then rode through the red light, knowing that no car would be turning in to the passing train. It was illegal but safe.

When the woman caught up to me—have I mentioned that I was not riding hard?—she said, "You're a good rider."

The Mormon Boy Scout part of me wanted to say, "Thanks! You're a good rider, too!"

I knew what was coming next.

"Your wheel isn't seated right. It's at an angle."

That's true! I had a flat tire and wasn't able to get the wheel back in properly. It caused the brakes to rub, so I fixed the problem by loosening the brakes.

"You can't have everything," I blurted, happy not to be told that cyclists need to follow the rules of the road.

As she rode ahead, I wondered if she always takes that approach, giving compliments before providing feedback. Excuse me, you have a lovely shirt, and your fly is open.