It has been reported that this web log has not been updated in days. This half-truth is only a click of a Publish button away from becoming an outright lie.

Form a rock band. Earn money by playing music that people either pay for or convince a library to pay for. If Fred Durst can earn money doing this, anyone can. The key to forming this cash cow is to come up with a good name. And here's where my brilliant idea enters the picture. Start the name with "SRO."

Why is this such a great idea? Because when the band goes on tour, the venue automatically includes "SRO" on the billboard. Passers-by will say, "Hmm, standing room only. I better go check out that band at the library." And then pretty soon all the libraries in the country will have to carry your CD.

If Led Zeppelin had been called "SRO Led Zeppelin," they never would have been forced to break up.

The season started out with a rematch between last years winner (us!) and the runners-up. The game included all the over-the-top festivities of a finals game, complete with announcers, national anthem, and barbecue. We lost 12-0. I pitched the entire game, giving up all 12 runs in 5 innings of work.

Then we lost the next game 8-5 against the sales guys (After School Special). Again, I pitched. No one likes getting beat in any way by sales guys, but losing that game was especially awful. I was 0-5 at the plate, stranded a bunch of runners, and got shelled for the second game in a row. With 14 teams vying for only 6 playoffs spots, things were looking bleak.

It goes without saying that I will discuss wiffleball at least one more time.

The end of Leadville marks the start of Fall Moab preparation. I was trying to think of the last time I went mountain biking, and I'm drawing a blank. It's possible that last year's Fall Moab trip was my most recent MTB experience. If that's the case -- if I have indeed not been on a mountain bike in ten months -- am I still a mountain biker?

I'm an excellent mountain biker! Wow, that was almost too easy to resolve. I really should have expressed that thought in a sonnet, with the first 8 lines covering the question of whether I'm a mountain biker, and then last 6 lines offering the resolution that I am, in fact, a mountain biker. It would have been more poetic that way.

In this sonnet that I might just write, I should mention somewhere that I weigh 190 pounds, and when I put on an XL bike jersey, it stretches so tight over my belly that I fear I might look like Scotty, the fantastic Phillip Seymour Hoffman character in Boogie Nights. Here's Scotty in action: 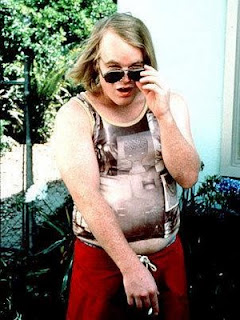 There are a couple of key differences between Scotty's appearance and mine. For one, Scotty does not look like he could be an elite wiffleball athlete. Second, for someone carrying extra weight, Scotty has disproportionately small man boobs.

Write a novel about superheroes. One superhero runs fast, one superhero is really strong, and one can swim underwater without coming up for air. Bad guys want to do bad things, and the superheroes need to stop them. Hollywood might just make a movie, and you'll be rich.

In Songbook, Nick Hornby talks about how the British people appreciate pop music for what it is whereas Americans look at pop music as being inferior. I agree. So I've been hunting around for great pop music. I have been shocked (shocked!) and appalled at some of the lyrics I've run in those not-so-innocent 1960s and 1970s. Check out this video:

There is no double entendre in this video. It's single entendre. This raspberry wants to have sexual relations with whomever it is he's singing to.

We need a man with some moral authority to step in and stop this madness. Or at least repress it. Mitt Romney might just be the man to restore Christian values to this country. In fact, he is definitely the man for the job, unless it might cost him votes or money, in which case cooler heads will prevail.

Thoughts on the Upcoming Election

If you are a Republican, and if you want Mitt Romney to win, you should just skip to the next section. I have mean things to say about that flibbertigibbet who makes John Kerry look decisively single-minded by comparison. How can a person who considers himself a faithful Mormon take so many different stances on so many different issues? I can only assume Mitt Romney compartmentalizes the worlds of business and politics the same way visitors handle their experiences in Las Vegas. Whatever happens in politics stays in politics.

I have a soft spot in my heart for Mormons, so it hurts to watch Mitt Romney carry on like a soulless robber baron.

Whenever I read about politics, one cloud hangs over practically every topic. Republicans want to win the election by focusing on the economy. To do so, they rely on the fact that Americans will forget that Republicans were in charge when the economy collapsed and ignore the fact that Republicans have done everything in their power to prevent Democrats from turning around the economy. Vote for Republicans! They'll lower the taxes of the wealthy, deregulate Wall Street, and embrace trickle-down! And why will they succeed where George W. Bush failed? Confidence!

Oh, and when did Republicans start believing that it's unpatriotic to pay taxes?

Borrow money to buy a small but relatively successful company. Give yourself a large salary. Set up a banking account in Switzerland or the Cayman Islands. Lay off a bunch of workers. Funnel money into your offshore account. Declare the business bankrupt. Move on.

Thoughts on the 2012 London Summer Olympics

1) The U.S. women's soccer team beat Canada in the semifinals.

That was one of the most exciting sporting events I've ever seen. Loved the bad calls that helped the Americans. Loved the YouTube clip of the Canadian woman stomping on the head of the American. If Canadians ask about the bad calls in a bar, you can just say, "Do you think Tancredi should be able to stomp on Americans' heads without being red-carded?" Canadians will apologize and then say something funny. I really like Canadians. 51st state, baby!

2) Kerri and Misty beat the Chinese in the beach volleyball semifinals.

Kerri and Misty are remarkably clutch. I went out of my way to watch every single one of their matches.

I don't really like Bolt that much because he's not an American, and I don't like Jamaicans because they're too uptight about relaxing, but that 100m sprint was something. He would have beat me by a good five yards.

Charming moment helped by the fact that that little British guy is not a threat to American dominance.

I also thought about adding men's team archery. In the final match to decide who gets gold and who gets silver, the Americans shoot their final arrow and lead by 9. If the Italian shoots anything less than a 9, they lose. If he shoots a 9, they go into extra rounds. If he shoots a 10, they win. Bam, bull's eye. The Italians celebrate. This would have made the above list, but the Italians failed to celebrate their gold medal by raising an American flag.