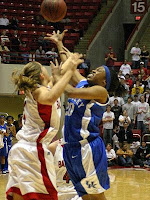 I have Olympic fever. When the boys get settled, I turn on my laptop and the television, switching between the NBC channels and the CBC (Canadian Broadcasting Channel).

I prefer the CBC for two reasons. First, NBC claims to broadcast some events "live," but they don't happen to mention that it's live only on the East coast. They still think they can get away with that when anyone can look up the "live" results three hours before they're broadcast by surfing the web or flipping channels. Second, I prefer Canada's coverage. High on sports, low on interviews and heart-warming bios of underdog Americans.

Wendy and I were holding hands on the couch when the following conversation took place:

Wendy: "Oh, you're turning the channel."

Me: "Yeah, I don't like watching women play basketball. The players look clumsy and frumpy."

Wendy: [Releases my hand and slides away from me.]

Me: "Did something I say upset you?"

Me: "For me it's a matter of preference. Men look good playing basketball or football or rugby. Women look good when doing gymnastics or diving or doing anything that brings our their grace. Both men and women look great playing volleyball. Neither look good playing field hockey. I don't want to see women play basketball, and I don't want to see men figure skating. But I'll watch anything if the USA has a chance at gold."

Me: "It's possible that I need to reevaluate my preferences and undo sexist programming. I'll work on that during football season, which is only three weeks away!"

Note: It's possible that I have not captured the nuanced nature of Wendy's arguments. And I may have embellished some of my own.
Posted by Bob at Tuesday, August 19, 2008