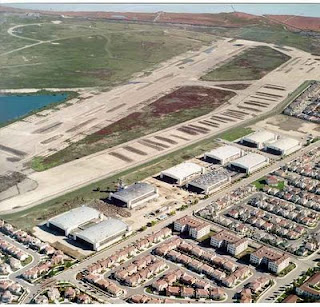 I now subscribe to three -- and only three -- podcasts: Bill Simmons' B.S. Report, NPR's This American Life, and the New Yorker fiction podcast. A recent New Yorker podcast is particularly interesting to me, which is why I'm bringing it up. Tobias Wolff reads Stephanie Vaughn’s short story “Dog Heaven.”

This story itself is interesting -- Tobias Wolff has a keen eye for good fiction -- but what most intrigued me is that the author derives so much of her identity from having been raised on military bases. It struck me as odd that I had many of the same experiences in the military subculture, yet I haven't thought much about how military life shaped me. For me, having grown up Mormon seems far more influential than having grown up as a military brat.

So, for the purposes of this web log entry, I'm going to view my upbringing with a different lens.

We moved every three years. Idaho, Sacramento, Riverside, Omaha, Colorado Springs, Upper Peninsula, then Riverside again, where my Dad retired from the military. My parents, brothers, and sisters all still live near Riverside, while I continue the nomadic lifestyle. Provo, Seattle, Indiana, back to Seattle. I'm always restless, planning the next move. That's why this housing bubble is so difficult for me. After living in a place for three years, I at least need the freedom of knowing I can move on when I start feeling restless.

Growing up, we lived both on base and off base. In Colorado Springs, the fact that we were military caused the locals to keep their distance, as if we were renters in an established neighborhood. That's probably for the best, since people in Colorado Springs are assholes. And don't give me any of that I-knew-a-person-from-Colorado-Springs-who-wasn't-an-asshole nonsense. That's just the exception that proves the rule.

In Michigan, the situation was much different. There were basically three groups of kids in our high school. Locals, NCO kids, and officers' kids. The locals were mostly people of Finnish descent whose ancestors worked in ore mines, eh. The NCO kids and the officers' kids took different buses to school. It's not like we wore colors and had gang fights. For the most part, the school was divided in the typical categories of any American school in the late 70s -- jocks, freaks, and nerds. I suppose some of the officers' kids could have been considered preppies.

When I was in high school, I was a good Mormon boy -- I didn't drink or smoke or carry on -- but I probably had my rights read to me five or six times. In nearly every case, we broke curfew and someone in the car mouthed off to the patrol guard at the gate. Now that I think about it, the guards were most likely bored 20-year-old kids looking to bust someone's balls. You have the right to remain silent...

When I grew up, we shopped primarily at two stores -- the BX and the Commissary. The BX is a cross between a Wall-mart and a Ye Olde General store. The Commissary is a grocery store. At both places, the prices are cheap and there are no taxes. Whenever we had to buy groceries off base, where the rabble tried to make do in their civilian lives, it always seemed like a big rip-off, the equivalent of buying groceries at a 7-11. (Speaking of 7-11, I remember when those stores were open from 7 am to 11 pm. And I remember shopping at an 8-11 store.)

The government coddled us. Living in base housing was cheap, and utilities were included. If a military man wanted his family to live off base, the government provided a stipend for helping with the rent or mortgage. When we needed medical care, we just went to the base hospital at no charge.

After having grown up with all these benefits, I thought it would be crazy to do anything but join the military. So before my freshman year at BYU, I enrolled in ROTC. My plan was to be in the military and let the government take care of me. When I went to the ROTC class early on the morning of the first day of school, something felt wrong. Nearly 30 years later, I still remember what that drab yellow classroom looked like. We were packed into that little white building in the parking lot of the Law school. After about 20 minutes of listening to the ROTC guy, something felt wrong. Military life was at cross-purposes with the university atmosphere. I stood up and walked out of the class.

In that moment, I gave up military life. No BX, no Commissary, no I.D. cards, no government coddling. I was alone in the world. Walking out of that ROTC class was nearly the equivalent of Ben Franklin walking into Philadelphia carrying only a dollar coin and a loaf of bread to make his way in the world. Of course, Ben Franklin and I are different people. For one thing, he is dead, while I, myself, am alive. That's huge.

This thought may or may not have occurred to you, but some military personnel must participate in wars. My father did several tours in Vietnam. He'd be gone for months at a time, leaving my mother to watch us five kids. She got some help from a bitter wretch named Mrs. Storm. If I weren't such a kind-hearted person, I'd hunt her down for having sneered at us. She was a walking caricature, with a long nose and cat rim glasses.

The one benefit of my father's tours was that when he'd come back from Asia, he'd bring cool gifts. I still remember a red phonograph with AM/FM radio. I bought my first album -- Don McClean's American Pie -- and played it on that phonograph over and over. I also played two 45s: George Harrison's "What Is Life" and Vicki Lawrence's "The Night the Lights Went Out in Georgia": Slapped the sheriff on the back with a smile, said "Supper is waitin' at home, and I gotta get to it."

I loved that little red phonograph.

Some men died. Bobby Alley's father was declared Missing in Action when his B-52 was shot down. I also remember being in the old Buick station wagon with my father when he told us that several of his friends were shot down in B-52s during a two-week stretch, because the Vietnamese acquired Soviet technology that zeroed in on the high-flying bombers. God, I hated the Russians! It was bad enough that we had to duck and cover under their nuclear threats.

An odd thing about military bases is that all the buildings seem intentionally ugly. From the outside, there is little difference between an airplane hangar, the gym, the movie theater, the library, or any of the office buildings. It wasn't even a matter of function over form. It was more like a macho disregard for taste. Or maybe it goes back to the notion that everything was temporary. The building isn't going to be here for long, and neither are we, so why put effort into it?
Posted by Bob at Tuesday, October 14, 2008