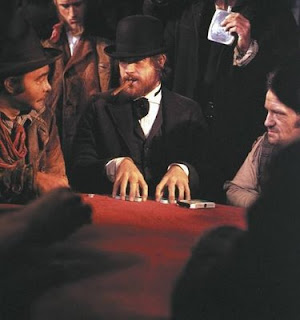 McCabe & Mrs. Miller isn't a popular movie, and it doesn't seem that critically acclaimed. Sure, a few critics rave about it, but you don't see it listed on the great films lists. Or maybe it's just me. Before seeing it, I thought it was one of the inferior Robert Altman movies that has appeal only because it was an Altman film. I finally broke down and watched it.

It's one of the greatest movies I've ever seen.

I still can't get over why this movie isn't better known, other than the fact that it's bleak. Maybe it's the fact that people looking at it as western would be disappointed in its lack of western qualities, and people who look for an arty movies end up seeing a western.

The movie reminds me of Deadwood. In fact, Deadwood seems closer in spirit to McCabe & Mrs. Miller than M*A*S*H is in spirit to Altman's original movie.