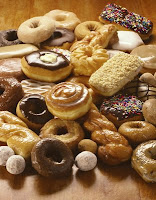 This year, I did not enter Leadville. It's been too time-consuming for me to get into racing shape the last couple of years, and since I finished in under 12 hours this last year, I thought good riddance.

Now I regret that decision.

For one thing, I now weigh 194 pounds. To put that in perspective, I weighed 168 pounds at Leadville last year. The tricky thing is to determine what percentage of that weight gain is fat versus muscle. Since I haven't been swimming, lifting weights, or doing any physical exercise other than riding my bike slowly into work a few days a week, it's fairly safe to say that of those 26 pounds, approximately 100% is fat.

The scary thing is that I haven't been eating that bad in January and February. At the end of last year, I used to eat these huge apple fritters 3 or 4 times a week. I justified it by saying, "I don't care if eating these things costs me 10 years of my life. They're yummy!"

OK, now I recall that I often have second and third helpings of dinner, and I graze all evening long. We also got a bread-maker for Christmas. If I'm given a last supper, bread with butter and honey would definitely be part of it. In fact, last night I ate so much bread and pizza that I woke up in the middle of the night thinking I needed to throw up. But please don't think of me as a glutton. Greed and gluttony aren't really sins anymore.

What I'm saying is that I need motivation to get in shape. The mirror obviously isn't working as a deterrent. I'm still sexy as hell. I need Leadville.

Since I can't do Leadville this year, I need to find something else. I thought about triathlons, but my knee hurts too much to run, and swimming at the YMCA is a drag. So what can be my carrot?

So that's all I have to say about that.