Race Across the Sky 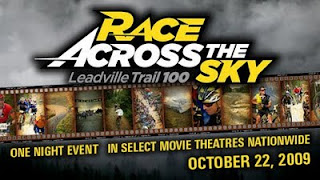 Last night, Wendy and I went downtown to see Race Across the Sky, a documentary about the 2009 Leadville race. The movie was shown as a special event in theaters across the country, which I think is a cool thing for movies with a relatively small but enthusiastic audience -- vertical markets, as marketing people would call them.

The people who created the documentary did a good job of showing what the race is about. It's primarily a race for amateur cyclists who want to test themselves. Even though the Lance Armstrong-Dave Wiens battle is the focus of the movie, the filmmakers emphasized the grassroots nature of the event, cutting back and forth between the leaders and the unknown cyclists battling to finish. Personally, I would have preferred a little more of the unknown cyclist and a little less of the top riders.

Here's what I liked:

* Near the beginning of the movie, they showed the terrain by tracking a yellow line over a Google Earth-like map. They cut back and forth between the racers and this map, letting viewers know exactly where the racers are on the course.

* I was wondering how they would show the heartbreak of failure, which is very much a part of the Leadville experience, as Dug wrote about in my favorite Leadville write-up. Dug talks about a wife and kids waiting for their husband and father to roll across the finish line in under 12 hours, and the disappointment on their faces as the shotgun goes off and he's nowhere to be seen. You can't end the movie on a downbeat note like that, so instead of showing some of the tragic figures who cross after 12 hours -- I was one of those people in 2007 -- they show the people being pulled off the course before the Columbine climb because they missed the cut-off time. It's a great agony of defeat moment.

* They did a good job of emphasizing the altitude and its effects. All four times I've done the race, I've traveled from Seattle. The thin air isn't that big a deal to my Utah friends, but it's a major factor for some of us.

* They showed what a great job the volunteers and medical staff do. I was telling Wendy after the movie what a cool experience it is to pull into an aid station and get treated like royalty, despite the fact that I curse them while spitting half-eaten banana chunks at their feet. OK, that's not true.

* The scene where Lance is riding across the top of Columbine with a huge drop-off in the background. Purple mountain majesty that.

* No mention of the 9-hour belt buckle. I guess they didn't want to over-complicate the story, but breaking the 9-hour mark is a huge deal to about a quarter of the racers.

* Bob Roll narrates the movie and does a good job despite a few wince-inducing lines, but where were Phil Liggett and Paul Sherwin? They might very well have had something to say about Lance Armstrong.

I loved the movie. It's going to join my DVD collection as soon as it's available.