Let's get this party started.

What's at stake for Bob in the Presidential election?

Two main things are at stake for me, Bob: (1) health care and (2) deterrence from lunacy.

Let's address health care first. Romney and his nutty right-wingéd friends want to do away with (privatize) all existing social programs—especially Medicare, Medicaid, and Social Security—and they don't want to allow even a watered-down social program like Obamacare to become fully operational. Ayn Rand and Grover Norquist would be so upset.

I want the federal government to continue these programs, just like I want the government to build highways and regulate businesses and defend our borders. In other words, I'm a commie socialist. If Romney is elected, he and Congress have vowed to repeal and "replace" Obamacare. If Obama is elected, at some point a right-winger will hold up a sign that says, "Government: Keep yore Hands of my Obamacare!" 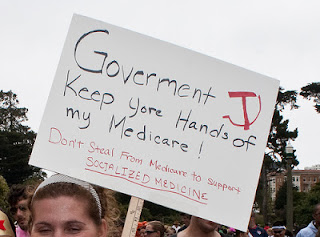 I no longer want health care to be tied to large businesses. Eventually, I want the government to raise our taxes so that we all have government-controlled health care. That way, I can decide to leave a company to do freelance/contract work without getting crushed by COBRA or some ridiculously expensive private health care plan.

The second issue is deterrence. Romney has expressed a lot of different stands on different issues, so I'm not sure whether he'll be a relative moderate Republican who caters to Big Business or a more radical (severe?) Republican who caters to the Tea Party as well as Big Business. (I don't believe even he knows.) I can assume that at best, he'll be a slightly more competent version of George W. Bush, who was a blight on Amurrica. I'm against pensions. Pensions used to be a good thing back in the 40-years-and-gold-watch era when huge corporations were more stable. Pensions don't make sense in a society where people change jobs every few years and bounce around from state to state. And when huge companies like Blockbuster and Circuit City flame out in a few years, any pension plan is going to be lost. And government pensions suck because I don't work for the government.

I want pensions to be replaced by more generous 401(k) plans. Am I saying I don't want to privatize Social Security or Medicare, but I do want to privatize pension/retirement plans? Yes, that's exactly what I'm saying.

But wouldn't Romney be more like Reagan than Dubya?

I don't think the powers that be like Romney very much. I think Mitt is taking the same kind of unfair beating in Washington insider circles that Al Gore suffered from in 2000, back when Gore was a robot and Dubya was the kind of guy everyone wanted to drink a beer with. In this election, no one wants to drink a beer with either candidate, really, but Mitt is perceived as the rich asshole who won't get off the cell phone.

Ultimately, I think Romney is going to lose a close election because too many people think he's a dick.

What happened in wiffleball?

We started off the season 0-2 thanks to some erratic pitching on my part, and then we went on a roll with decent pitching and strong hitting. We finished a half game out of first place in a tie for second. We lost the tiebreaker, so we finished as the #3 seed, which meant an opening round one-game playoff against the #6 seed.

With our best pitcher struggling with control, we were down 10-7 with two innings to play, and then we trailed 11-10 in the bottom of the last inning. I led off the inning with a walk, and our pitcher, who felt awful for having pitched so poorly, belted a two-run walk-off homer to redeem himself and put us in the semis.

In the first semi-final game, we faced a decent team with a pitcher who was the star of his college cricket team in India. I've never seen anyone who can throw a wiffleball that hard. Since he started pitching in his team's fourth game of the year, he had given up only one run all year. He had three pitches: a straight blazing fastball and two slightly less blazing fastballs that broke either inside or outside. He was easily the best wiffleball pitcher any of us had seen, but he pitched on a team with mediocre hitters.

In game 1, our pitcher gave up a few hits but no runs. Their pitcher mowed us all down. I felt helpless. In the first three innings, he walked one hitter, and another hitter managed to pop up to the second baseman, which was a moral victory for us. With two outs in the top of the fourth inning, I guessed right and belted a pitch over the right-field fence for our only hit of the game. We won 1-0.

In game 2, we gave up more runs, but their pitcher's arm was sore. Throwing a wiffleball that hard probably isn't too smart. We trailed 3-1 going in to the bottom of the last inning, but he had stopped throwing his nasty heater. With the bases loaded and me on deck, the batter before me hit a two-run double to tie the score. I thought the pitcher would walk me since he had walked me in every previous at-bat, but he decided to pitch to me—I think he wanted the game to end. I hit a single to send our team into the final for the third straight year.

In the finals—complete with over-the-top announcers, national anthems, fourth-inning stretches, crowds, and at-bat music for each hitter—we lost game 3 in extra innings. I played well, so I blame the loss on my teammates. And I told them that in a contemptuous fit after the game. OK, I lied about that. But not about pension plans. That was true!

Now that Sunday night is when networks want to air their best shows, we're faced with an interesting decision. When the boys are in bed and we have only an hour to watch TV and two shows have recorded, which show do we watch? Here are some difficult choices I recall having over the years:


The Sopranos always won out, but Deadwood eventually became my favorite rewatchable show of all time. While I loved the first few seasons of Mad Men, the show isn't appealing enough to knock off Game of Thrones. Breaking Bad is a better show than Justified, but you have to be in the right mood. Same with Homeland. Sometimes, watching people impale, slash, behead, and defenestrate zombies is more appealing than watching Clair Danes struggle with a life-long mental breakdown.

I don't have this problem with books, by the way. If Richard Russo, David Sedaris, Nick Nornby, Mark Helprin, and Tobias Wolff all come out with a new book at the same time, I would somehow manage to ignore them all as they clutter my nightstand while watching reruns of Deadwood and The Wire on my iPad.

But what if people discovered a bunch of buried fiction from my favorite dead authors?


I think I'd go with Mark Twain's imaginary new novel.

Fall Moab is only a few weeks away, so it's time for me to get back on the mountain bike. There is a new trail section at Tapeworm that includes a pump track section along with a bunch of elevated ladders that I have tentatively named "Sphincter Pucker," "Widow Maker," "Fly or Die," and "Just Do It—No Don't!"

In about three weeks, we'll pull into the parking lot at the bottom of Gold Bar Rim, and the sky will be broad and clear, and everything will be right with the world for a few hours, and then the pressures of work, the duties of family, and the responsibilities of television will fetter us once again like dust in a corn silo. Or something.