Black in the Saddle Again 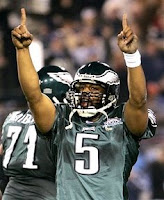 Donovan McNabb claims that black quarterbacks face more pressure and more criticism than white quarterbacks. "There's not that many African-American quarterbacks, so we have to do a little bit extra," he said. "Because the percentage of us playing this position, which people didn't want us to play ... is low, so we do a little extra."

McNabb's comments are especially interesting in the wake of the Rush Limbaugh fiasco that happened a few years ago. Limbaugh claimed that McNabb was overrated because he was black, and the liberal media wanted black quarterbacks to succeed for social good. (Ah yes, damn those liberal commie sportswriters...) This was back when McNabb was actually playing well. All sorts of people defended McNabb and blasted Limbaugh, who was forced to resign from ESPN for his comments. I'm almost tempted to hear what Limbaugh has to say now. Almost.

Are McNabb's accusations true? I think I'm well qualified to judge since I watch a lot of sports and have racist tendencies. So let's break this down.

Is there any historical precedence?

First, an anecdote. I was playing flag football in a spring tournament during the early 90s. I know you're thinking, "Flag football, pfff." But there were some excellent athletes playing in these games. There were receivers and defensive backs who played for BYU and the U of U, and there was even a guy who played pro quarterback for the Seahawks. I had never heard of him, but still -- I thought it was cool that I was trying to sack a guy who'd played in the NFL. While I was chasing him in the backfield, he overthrew one of his receivers and berated himself:

I remember thinking at the time that his attitude probably wasn't isolated. I imagined other pro players and coaches were saying the same kind of thing. Throw it like a white guy. There is no question that in previous generations, racial bias prevented lots of talented black kids from playing quarterback. The problem, according to conventional wisdom, was that black people weren't smart enough to play a position that required so much analysis. When I was young, I heard this and believed it to be true. I'm sure this attitude has contributed to the fact that no black quarterback has ever been considered among the greatest. Doug Williams is the only black quarterback to start for any of the winning Super Bowl teams, but he was good, not great. Warren Moon came the closest to being in the upper tier. He had a great college career at the University of Washington, leading his team to a Rose Bowl victory, but NFL folks didn't think he could play quarterback in the NFL so he went to Canada for a few years and lit it up, winning a whole bunch of Grey Cups, eh. When he finally played for the OIlers in the NFL, he was a top 5 quarterback. He had a similar career as Dan Fouts', playing in a high scoring offense that allowed him to rack up the stats, but his team went nowhere in the playoffs, so he didn't get as much acclaim as guys like John Elway and Joe Montana.

Why would McNabb say this now?

McNabb is feeling serious pressure that he might lose his job. One contributing factor to his insecurity is the fact that he sucks this year. In that Monday night game against the Redskins, he was awful, missing open receivers way too often. He was the main reason the offense was sputtering. Last year, the Eagles looked like they were out of the playoff picture halfway through the season. McNabb got injured, and when the backup quarterback took over, the team won a bunch of games and snuck into the playoffs. They did better with a backup quarterback than with their star quarterback. To make matters worse (for McNabb), the Eagles drafted a quarterback in the first round of the draft and cut their popular team leader on defense. McNabb grumbled publicly about both of these moves. He's insecure and shaky right now. It doesn't help that he plays in Philadelphia, which is Greek for "city of hate" (delphi=city, philos = hate). Philadelphia fans are the meanest, nastiest fans anywhere. Plus, McNabb is also struggling to recover from a serious knee injury.

"I pass for 300 yards, our team wins by seven, 'Ah, he could've made this throw, they would have scored if he did this,' " McNabb said. Yes, if only that were the complaint. The problem is, he hasn't thrown for 300 yards and he hasn't missed only one throw and his team hasn't won any games. If a veteran quarterback completes only half of his passes, can't move the offense, and fails to win, should he be above criticism because he's in Campbell's soup commercials? Maybe he'll get better, but if he doesn't he deserves the criticism.

Is he just playing the race card?

Here's my favorite race card story. When I was a lifeguard, one of the cashiers was a black woman that I couldn't stand being around. She was always complaining. Bitching. When any other cashier was around, the conversation was usually lively, but when this black woman was around, the conversation was about her various grievances. At one point, she was upset that cashiers didn't get paid as much as lifeguards. She did all the real work while we just sat around watching people swim. I pointed out that she didn't see us teaching lessons before she arrived or cleaning up after she left, nor was she taking into account that we had to pass training classes to become certified. When I pointed out the fact that she could become a lifeguard by taking a few classes, she said, "I can't swim." But she didn't say it in a shameful way. She said it as if The Powers had failed to give her the ability to swim, so The Powers had better make up for it. After that conversation, I stayed away from her as much as possible, even if it meant taking extra shifts in the chair. She was a human rain cloud. On one rare occasion when I was sitting in the front area next to her, she looked at me and said, "You don't like me because I'm black."

Was that true? At the time, I didn't think so, and if I'd had any black friends at the time, I would have mentioned them, and then I could have said that I didn't care if someone was green, purple, or black... Anyway, I thought I didn't like her because she was stupid, mean, and loud. But she may have been reacting defensively. Same with McNabb. I don't know what he and the other black quarterbacks are going through. In my view, the quarterbacks in the hot seat are McNabb, Rex Grossman (white), Joey Harrington (white), and Eli Manning (white). Black quarterbacks like David Gerrard, Jason Campbell, and Tavaris Jackson are viewed as erratic and inexperienced but promising, so they have a little more leeway. Steve McNair (black) used to be really good, but he's over-the-hill now. Vince Young (black) and Matt Leinart (white) are seen as rising stars. So what is McNabb seeing that I'm not?

Do some black quarterbacks get criticized too much because they're black?

I thought Kordell Stewart single-handedly prevented the Steelers from winning a couple of Super Bowls a few years ago. It was crazy that he wasn't replaced sooner. Same with Aaron Brooks, who was awful for years but kept getting way too many chances. Just like Joey Harrington and Rex Grossman and the Detmer brothers. Is there a black quarterback who's currently not getting a fair chance? Byron Leftwich? Michael Vick? Is Tavaris Jackson having to do more than Joey Harrington to keep his job? Is Vince Young having a rougher go than Matt Leinart? Is Duante Culpepper criticized more unfairly than Charlie Frye? I don't think so.

Can't you be a little more controversial?

OK, I like the fact that white players dominate the quarterback position. Let's suppose the NFL mirrored the NBA, and all the quarterbacks were black except for a German guy, and the only white players were linemen or backups. Would I enjoy watching the NFL as much? No, I wouldn't. I suppose I could justify this thought by saying that I identify more with white athletes than with black athletes. And in the NFL and NBA, white players are certainly a minority, so we're the underdogs now, etc. But I also recognize the racism in my attitude. And maybe this is the kind of attitude that McNabb is responding to.
Posted by Bob at Wednesday, September 19, 2007