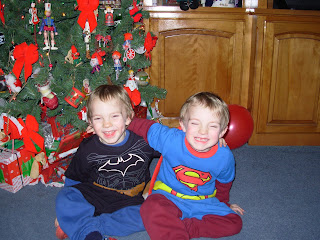 I know you're supposed to have an angle when you write something. I should write about why Christmas stresses me out or why I love Christmas, but I'm not going to do that. I'm just going to let it flow. So here goes.

I love Christmas, but it stresses me out. For one thing, Christmas makes it so much easier to deal with Luke and Max. They get to open a Lego advent calender every morning, so instead of doing battle to get them dressed, I can say, "Go get your clothes on so that we can open the calendar." They run, and I get to stay in bed. Plus, whenever they don't want to do something they're supposed to do, I can bring out the Letter to Santa Claus threat. As in, "If you don't eat the rest of your noodles, I'll write Santa Claus a letter and tell him to give the bikes to someone else and bring the boys a little bag of trash." It works every single time. You may wonder why I refer to a "bag of trash" instead of a "lump of coal." Foresight. Here's how the lump of coal conversation would go:
Me: "If you don't eat your noodles, I'll tell Santa to bring you a lump of coal."
Boy: "What's coal?"
Me: "It's a bunch of little black rocks that you light on fire to stay warm."
Boy: "I want to big bag of coal for Christmas. And matches!"
This is also the first year that Luke and Max have a genuine sense of Christmas. Two years ago, their two favorite presents were the chewable box and the tearable paper. Last year, we had to remind them on Christmas morning that it was Christmas morning. This year, they're already having trouble going to sleep because they're so excited about the possibility of getting a red lightning bike (Luke) and a blue bike with a black seat (Max). There's an old Mormon saying that goes like this: The only thing more infectious than enthusiasm is chlamydia.
Christmas stresses me out for all the familiar reasons, and more. First, I've been buying my family members books since the early 90s, and I ran out of book ideas five years ago. So I buy books that are most likely either unwanted or duplicates of books from previous years. Then there are all the shopping hassles, wasted energy, and wasted money (express shipping, unwanted gifts, bad mall food). And then there's the odd sense that everyone is buying gifts out of obligation, but everyone keeps doing it anyway to be unGrinchlike.
And then there are the things that just didn't work out. Last year, I created a funny Christmas card that showed Luke and Max bawling their eyes out on Christmas morning. It was empirically hilarious. This year, I tried to be tricky by photoshopping my image into a family photo that I took, but it looked more creepy than funny. (By the way, one of you may have gotten two-thirds of a Christmas card. The post office sent me an apology notice with a sliced photo of Luke. If you didn't get a Christmas card, it may have gotten eaten.)
I suppose I feel about Christmas what Woody Allen feels about life: it's full of loneliness, and misery, and suffering, and unhappiness — and it's all over much too quickly.