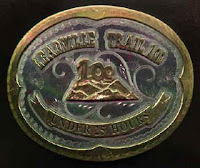 I'll go into more details later, but here's what happened:

Dave won his sixth straight Leadville title, breaking the record by 13 minutes. Lance dropped away with 10 miles left to go and finished two minutes behind. For you Lance Armstrong fans out there, take pleasure in the fact that Lance won the 30-39 age group. Dave Wiens is 43.

I finished in 11:22:44. Besides being a Fibonacci sequence, this number is significant because it's less than 12 hours. I won a silver belt buckle. I also ended up going to the emergency room afterwards. According to the doctor, I actually drank too much water and flushed all the electrolytes out of my system, which made me so dizzy and sick I felt drunk.

Key differences between this year and last year:

* I was in better shape.

* The bike I borrowed was fantastic. I love the Superfly.