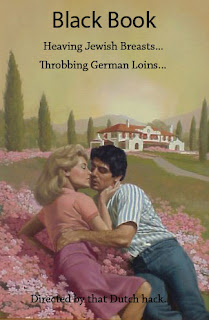 I don't get to see many movies in the theat-ah these days, what with work and twins and cycling and pro football and all. So when I do break down and go see a movie, it has to be pretty bad for me not to enjoy it. We hired a babysitter and went to see Zwartboek (Black Book) on Saturday. I knew going in that the movie was directed by the same Dutch guy who had made the highly mockable Showgirls, but I heard Black Book was a return to his former glory. I imagined that Showgirls was an aberration. After all, Stephen Spielburg directed Howard the Duck, Rob Reiner directed North, and the same European guy who directed The Vanishing turned around and made the same movie in America, only he dumbed it down and tacked on a cheesy ending. So I looked at the list of available movies playing, checked out the glowing user comments, and chose Black Book over Waitress and Spiderman 3.

Before I discuss this movie, which is a schlocky romance masquerading as an arthouse film, be forewarned that I'm not concerned at all about spoilers. If you like this movie, I think there is something very wrong with you, and I don't care about ruining your experience. That said, it's the story of a Jewish girl named Rachel who is hiding underground in Holland during World War II. In an attempt to escape German occupation, she and her family try to flee south in a boat. The escaping Jews are double-crossed, and she ends up joining the Resistance and doing the Mata Hari thing in seducing the head of the gestapo to find out who betrayed her family. Only things aren't so simple...

Whenever you see a bad movie that you thought you were going to like, there are five stages of processing the catastrophe:

Denial (OK, there are too many coincidences, but Dickens does that too, and he's great. Just go with it...)

Anger (Dickens never has a heroine flash her breasts at the German head of the Gestapo and ask three times, "Are these Jewish?"...)

Bargaining (If this movie ends in the next ten minutes, Dear Lord, I promise I'll be kinder to Minette's dog...)

Acceptance (I'm in a dark place now, but you bet your bottom dollar that the sun will come out tomorrow...)

Terrible, awful movie. I can't get it out of my head. Its qualities are, without exception, unredeeming. Don't see it.
Posted by Bob at Monday, May 21, 2007