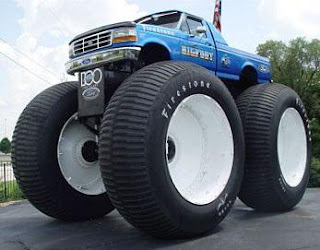 In today's battle of ¿Quien es Mas Macho?, we're pitting contemporary conservatives against drivers of big-ass trucks. For those of you who don't speak Spanish, "¿Quien es mas macho?" can be translated roughly as "Who ees tee more macho?" Of course, there's a difference between "macho" and "strong-willed" or even between "macho" and "manly." At the core of machismo is some form of weakness that leads to overcompensation. The greater the weakness, the greater the overcompensation. Ergo, the more macho is he who exhibits the most wussified behavior.

Why contemporary conservatives are more macho
After 9/11, they're running so scared that they sign off on reducing personal freedoms, restricting Constitutional rights, and torturing prisoners. Because we can't fight the war on terror without torturing now, can we? That would be like asking a logging company or a steel company to take better care of the environment. That's asking too much. Conservatives wring their hands and ask, "What about the JOBS?" With this kind of sissified underbelly, contemporary conservatives need rude, blustering heroes like Rush Limbaugh and Sean Hannity to help them through the long, dark nights.
What big-ass truck drivers are more macho
Have you ever seen one of these big trucks take a speed bump at speed? No, and you never will. They're scared the wittle speed bump might hurt their car. On my way to work this morning, I had no choice but to notice a driver of one of these monster trucks, because he revved his engine so loud I thought an airplane was taking off. VROOM! VROOM! Then the driver — I'm assuming it was a he because I didn't see softball equipment in the back of the truck — nearly came to a complete stop, easing the huge front tires over the four-inch bump. He lurched forward rumbling like a speed boat motor and then eased the rear tires over the speed bump, and you know what's next. VROOM! VROOM! Mr. Bat-out-of-hell-nothing-can-stop-me-except-maybe-a-speed-bump-or-pothole big-truck driver has done it.
¡Eso es mas macho!
Posted by Bob at Monday, May 14, 2007