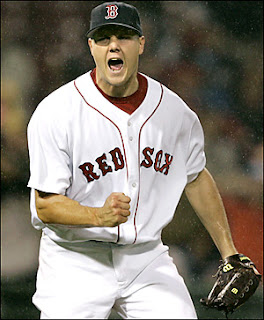 Yesterday was a good day for Boston sports fans. The Red Sox won the World Series and the Patriots crushed a pretty good Washington Redskins team. I find myself in the odd position of loving the Red Sox and hating the Patriots. You see, I grew up over the western United States, so location never meant much to me when I picked teams to root for. But more on that in some other post.

The Boston Red Sox
It's not that Mike Lowell didn't deserve to win the MVP. He did. Still, I kind of hoped Jonathan Papelbon had won the award. Forget about the fact that he made three saves; what's more important is the sense of relief he gives to his teammates and fans. If the Red Sox have the lead in the late innings, they're going to win. (Personal digression: I was with a woman once, and, um, let's just continue with the sports lingo and say that I shut her out, 1-0. "No problem," she said. "I'll just bring Eck out of the bullpen." So she reached into the bag of goodies she had stashed under the bed and pulled out her silver friend who looked nothing like Dennis Eckersley. There went my shutout.)
There was once of those online polls asking which team was better, the 2004 Red Sox or the 2007 Red Sox. Despite the ridiculous nature of those polls, it's a good question. The 2004 team had to deal with all the Babe Ruth curses, disbelievers, and back monkeys, so for them to overcome all that and win was remarkable. Still, they were the underdog wildcard team that year, and they seemed overmatched against a better Yankees team. This year's Red Sox had a handful of the same players -- Ortiz, Schilling, Manny, and a few others -- but they had the best record in baseball from April through October. The Yankees made a furious comeback, but the Red Sox held them off and never panicked. If an alien world or Cuba challenged us to pick one of those Red Sox teams to a best-of-seven series against its finest players, I'd take the 2007 Red Sox.
The New England Patriots
Wow, is this team bitter! Leading 38-0 in the fourth quarter, the Patriots had the ball on the Redskins 2-yard-line when a lineman jumped offsides. Tom Brady barked at him as if the outcome of the game were still in question. A couple plays later, Brady hit an open receiver in the end zone, and both players celebrated like they'd just taken the lead. In this situation, most teams resort to their running games to run out the clock, but the Pats insist on playing hard and running up the score. I think part of it is the mentality that when you're on the field, you give it your all. But it seems like there's something else going on, like maybe the Patriots are getting revenge everyone for calling them cheaters. Nevermind the fact that they were caught cheating. Maybe if they win this year without cheating, people will forget that they used to make a habit of cheating, and the fact that their cheating cost the good-hearted Colts a couple of Super Bowl titles. I hate the Patriots.
Next Sunday, the Patriots are going to play the Colts. Neither team has lost. The Patriots look invincible, winning their games by an average of about 25 points. The Colts look shaky by comparison, often struggling in the early stages of the game. The Colts have beaten the Patriots three times in a row, but this Patriots team has three of the best receivers in the league. More on that game later, sports fans.
Posted by Bob at Monday, October 29, 2007