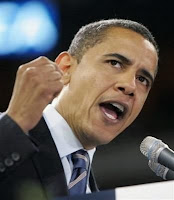 * Obama's speech was wonderful in many ways. Most of all, it was genuinely inspiring. I respect this guy. And it was an effective rebuttal to the various McCain attacks. Obama was clearly not a Paris Hilton-type celebrity. He was unpatriotic only to the frightened wingnuts who forward all those ALL CAPS messages. His foreign policy ideas are a refreshing counterpoint to Bush's global failures.

* Anyone who watched that speech should have no fear that Obama would be a wise, forceful leader. He looked presidential. The more people see of Obama, the more impressed they should be.

* McCain still has a very good chance of winning the election. If Palin proves to be capable on the big stage, McCain's choice of veep will be an effective counter to Obama. And McCain doesn't need to prove that he'll be a good president. He just needs to make the election a referendum on Obama, and let the Republican smear machine take it from there.

* I'm going to enjoy the Republican convention to see how McCain balances supporting Bush and presenting himself as the candidate of change.

* I want to get back to the point of both Democrats and Republicans offering offsetting strengths and weaknesses. While the Democratic party has its problems, the Republican party brings nothing to the table. They've abandoned previous core principles like small government and fiscal responsibility. I want to see the Republicans smashed and humiliated so they can reinvent themselves into the party that I can at least partially support.
Posted by Bob at Friday, August 29, 2008