More Thoughts on the NBA Playoffs 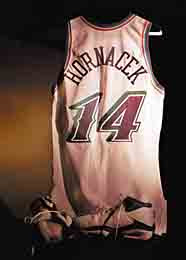 I thought I was done watching the NBA playoffs when the Jazz lost the game at home to the Spurs. Utah made it further than they deserved to. They're not quite in the same league as Dallas, Phoenix, and San Antonio. Until they get a solid outside shooter -- a Jeff Hornicek clone or maybe even Jeff Hornicek himself since he's probably just as quick now as he was ten years ago -- Utah will be stuck in the second tier. And I'm still upset about the way Phoenix lost. At the very moment they took control of the series against the Spurs, they got suckered into reacting to a cheap shot and had two of their best players miss the next critical game. The Spurs are boring, and the Eastern Conference teams are weak and sloppy.

While Wendy took the boys to Fauntleroy Park, I flipped to the game. The Cavs are a one-man team, and the Pistons aren't firing on all cylinders (te he). I don't know who the Cavs coach is, but I can read lips. During a timeout towards the end of the game, here's what he said to his team:
"Listen up, guys. Here's the play. You, you pass the ball to LeBron and then get out of the way. You other three guys, you get out of the way too. Maybe one of you should set a pick for LeBron, I don't know, but the important thing is that you look scared and tentative. LeBron is The Man. LeBron, you do that thing where to take a fall-away jump shot from 25-feet away. It might go in. Then get back on defense."
It's painful to watch. If this is what I can expect from the NBA, I may have to start watching the Rat City Rollergirls. You hear that, NBA execs? I don't watch hockey or baseball anymore. You're next.
Posted by Bob at Wednesday, May 30, 2007