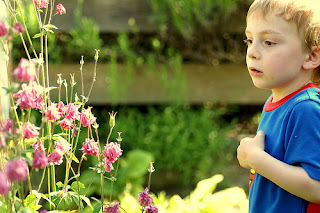 When the boys and I went to the park a couple of days ago, I sat on the bench and watched them play. Luke and Max instantly took to their favorite activity, which is running up the steps and then sliding down a pole like fire fighters. Just as Luke was getting ready to take his turn, a slightly larger boy put his hand on the pole. Luke slid down and knocked the kid's hand out of the way. The two boys stared at each other for a couple of seconds. Trouble. While Luke and Max ran up the steps again, I looked around to see if I could match the kid up to a parent. Nearly all the kids at the park were white, and there was one Latino kid who was with his father, so I assumed that the black woman sitting at a faraway table was the mother of the kid who was taking a dislike to Luke.

I don't know why it was important for me to figure out who the kid's parent was. Maybe it's the fact that whenever I'm at a park and there's any kind of confrontation, real or potential, I think of a short story that left a deep imprint on me -- "Sunday in the Park" by Bel Kaufman. It's about a well-educated couple who take their child to the park. A kid throws sand in their child's face, the sensitive parents try to get the boy to stop, and the boy's gruff father doesn't like their interference. I won't say anything else about it, because the ending is great. It's due to this story that whenever I see a little bully on the loose at a playground, I look around to see what kind of trouble I might be getting myself into in case the bully's father objects to my interference.
The boy stood near the pole and watched Max slide down the pole. When it was Luke's turn, the boy grabbed onto the pole and stared up at Luke defiantly. Luke told the boy to get out of the way because it was his turn. The boy continued to glare at Luke. Max had already climbed up the stairs and was waiting for his turn to slide down. Finally, Luke started to slide down the pole, very slowly, until he eventually forced the kid to give way. The boy crowded Luke. Luke hurried away and came over to the bench where I was sitting.
"I'm going to sit here next to you, Daddy," he said. "I don't want to play any more. I like sitting here."
"No, Luke. You can't do that. You have to get out there. Be brave."
To my surprise, Luke hopped off the bench and ran to the far side of the playground, where I couldn't see him. Max seemed oblivious to Luke's little battle and continued to slide down the pole. I sat there thinking about how difficult it is to get your kids to be sensitive to others' feelings without turning them into mealy pushovers. Maybe that's why so many parents enroll their kids in Tai-Kwon-Do classes...
After about ten minutes or so, Luke came back to our side of the playground. The boy who had menaced him was still wandering around, walking aimlessly on the railroad ties that enclosed the play structure. Luke walked over to the railroad ties about twenty feet from where the boy was headed and began walking towards the boy. They were on a collision course. At this point, I didn't care what happened. I was proud of Luke. The two boys met, faced each other for a few titillating seconds, and the bigger boy hopped off the railroad tie and ran to play with abandoned toys in the nearby sandbox.
Posted by Bob at Tuesday, June 12, 2007