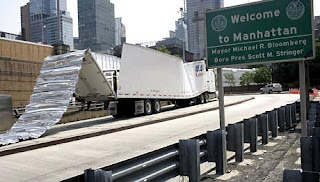 Question: When things start going wrong, how does a macho person act? Answer: The same as always. In Texas, it's called "sticking to your guns." Let's start with George W. Bush on Iraq.

That's going to be tough to beat. Let's see how the unnamed truck driver handles a little adversity. Here's an account of his actions from The Seattle Times.

NEW YORK — A truck driver whose rig was 6 inches too tall for the Lincoln Tunnel drove its entire 1.5-mile length, peeling the trailer's roof completely and ripping off decorative ceiling tiles.
Flashing signs and officers using a loudspeaker had warned the driver, and it was unclear why he didn't heed them, according to the Port Authority of New York and New Jersey, which operates the tunnel.
"He misjudged the height of the tunnel, and once he was inside it he didn't realize the damage he was doing," said Roy Guzman, the safety director of the trucker's employer, U.S.A. Logistics Carriers of McAllen, Texas.
The driver, from Texas, was charged with nine misdemeanor moving violations.

If you're going to crash the top of your truck into a tunnel roof and keep driving for a mile and a half, you pretty much have to be from Texas. Maybe someone from Oklahoma could pull it off. Maybe.