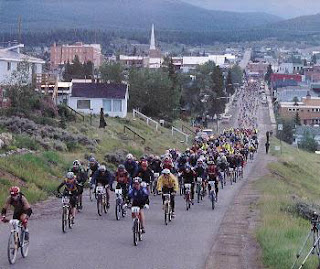 I am excited to announce, dearest fans and casualest readers, that I now consider myself trained well enough to ride the Leadville 100 in under 12 hours. I refuse to end the previous sentence with an exclamation mark because I haven't actually completed the race yet. I just think I'm ready. Big difference! Here are the things I'm doing to get ready for the August 11 race:

Riding to and from work

I continue to ride my bike to work, only with a twist or two. I usually work in the office four days a week. On two of those days, I ride in casually, and then I do "bursts" on the way home. Burst riding is just what it sounds like. After I warm up, I'll pick an open stretch, shift into the highest gear, and sprint as hard as I can for about 45 seconds. Then I'll back off. When I get closer to home, I'll ride hard up several hills, backing off only when I get dizzy. On the other two days, I'll take a longer route in one of the directions so that I get in a 2-hour ride with a long climb -- at least by Seattle standards -- at the end.

Long weekend rides
Wendy and I take turns watching the boys on the weekend. On Saturday, she goes out and shops, sees a movie, gets a massage or hairdo -- that kind of thing. On Sunday, I go on a 4-5 hour bike ride and spend the rest of the day complaining about being tired. Earlier this year, riding just 30 miles would cause me to complain about tiredness for a couple of days. The first time I did a 70-mile ride this year, I spent four days complaining. A couple of weeks ago, the same 70-mile ride only wiped me out only for the rest of the day. By the way, I'm really looking forward to this Fall, when I can sit on a couch on "my" day and watch football. That's a lot more rewarding than cycling. Or just about anything else.
Dieting
The training has been going reasonably well, but dieting has been my downfall. When I started training in March, I weighed 190 pounds. Now I weigh 178. That's not bad, but I was hoping to be closer to 170. Leadville has several large climbs, so the extra weight makes it just that much harder.
You want to know what my biggest problem is? Honesty. That's right. And kindness. Whenever Wendy asks me if I want a cupcake she bought for me at the cupcake store (yes, West Seattle has a cupcake store), I say "Yes" because it's the honest thing to say. I do want a cupcake. I do, I do, I do! To say no would be to lie, and it would be unkind to reject the cupcake after Wendy's kind thought. If my character weren't so noble, I'd probably weigh 158.
Posted by Bob at Thursday, July 05, 2007