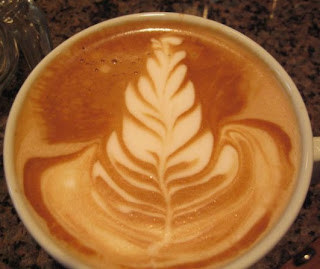 I may or may not have been involved in an odd conversation. I can't decide. I think what happened is that an inexperienced customer -- me -- ordered coffee from an inexperienced barista in Salt Lake, but neither of us knew enough about coffee language to allow for a smooth transaction.

Before I get to the conversation, let me say this. I rarely drink coffee, because A) I don't like the taste of it even though I live in Seattle and B) I'm one of those people who thinks it's ridiculous to pay $4.00 for a drink that doesn't have Vitamin C, alcohol, or heroin.
Before Robert took me to the airport, we went to a coffee shop. In the coffee shop, I saw all the typical types of coffee listed that I see in almost every American coffee shop. It's all based on the same Italian system -- latte, cappuccino, espresso, mocha. Before I had a chance to look more closely, the barista asked me what I wanted.
"I'll have a single tall mocha," I said.
"I don't understand what that means," said the young barista. "We only have small, medium, and large."
"Oh, sorry. Large."
"One shot or two?"
"One."
She made eye contact -- a sidelong glance no less -- with a young Salt Lake hipster at the bar. That made me feel old and goofy. It's not like I ordered a double tall soy half decaf dulce de leche latte no whip hazelnut sprinkle. Then again, I did impose Starbucks lingo, and Starbucks lingo is kind of stupid. Tall? I've never had a clear idea what that means, so I just say it because it seems better than "short," and it makes me sound a little bit like I know what I'm doing, except for the mocha part. Real coffee drinkers don't seem to order mochas. It turns out I should have said "Medium mocha one shot" in this coffee shop to avoid any confusion. But here's the kicker.
She gave me an ice mocha.
That seemed like a ridiculous thing for someone to do. I said nothing about ice at any point. Then again, niether did Robert, and he was happy with his ice Americano. And it turns out that everyone else in the store was drinking ice coffee of some sort or other. I seemed to be the only person in the store drinking hot coffee. Granted, it was 98 degrees outside, but I never said anything about ice.
So who was at fault for the breakdown?
Bonus anecdote: In downtown Seattle, Wendy was standing in line at a Seattle's Best kiosk. The woman in front of her said, "Before I leave Seattle, I just have to have a Starbucks coffee. Do you sell the Starbucks?" Without hesitating, the barister said, "Yes, ma'am, one Starbucks, coming up!" And he made her a cup of coffee.
Posted by Bob at Sunday, July 01, 2007