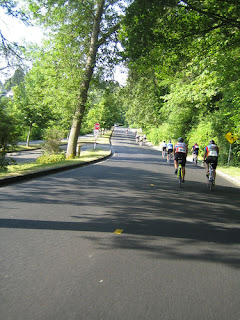 I woke up at 4:10 on Saturday morning to ride an indeterminate distance between Seattle and Portland. The tentative plan was to have Wendy meet me at the halfway point, appropriately called Centralia, and then she'd pick me up and we'd go visit Stan and Grey, who have kitty cats and chickens that the boys keep going on about. I staggered to the car, ate my breakfast while driving to the Adobe parking lot, and rode my bike a couple miles to the UW stadium. I started the ride about 5:00 a.m. Here's what I had with me: