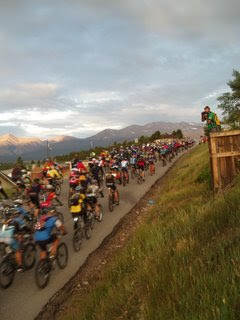 I promised earlier that this wouldn't turn into a training blog, but dammit, the Leadville 100 is less than three weeks away and I'm so excited I could tinkle. One of my favorite things about Leadville is the setup. Prizes are awarded for various categories and age groups, and most middling riders like me have no chance of winning any of them against hundreds of other riders. But here's what I like -- the belt buckles. Everyone who finishes in under 9 hours wins a gold belt buckle. Everyone who finishes in under 12 hours wins a silver belt buckle and a sweatshirt. Everyone who finishes in under 13 hours gets their time recorded. Anyone over 13 hours gets yanked off the course. Who cares if the sweatshirt will go in my "Clothes That I Never Wear" drawer? I still want it. And I want the silver belt buckle so that it can go in a random box in the garage -- unless I do the same thing with the belt buckle that I've been doing with the One Day STP patch, which is to place it in an annoying place until Wendy complains, and then move it to a different annoying place. Right now it's hanging from the lamp on her night stand.

A bunch of my riding buddies are doing the race. Here's what each person is riding for:

Elden - The Fat Cyclist has tried 11 times to break 9 hours, and the closest he's come to winning the coveted gold buckle is 9:13. This year, he hired a personal trainer, and despite the fact that his wife's cancer metastasized, he's whipped himself into the best shape of his life. Susan is a driving force behind his training, and Elden wants to break 9 hours for her. If it takes him longer than 9 hours to complete the race, I have it on good authority that Susan will divorce him. Elden is riding for his marriage.

Prediction: 9 hours, 2 minutes, but Susan will forgive him.

Dug - Dour Dug will try to complete Leadville on a single-speed bike for the first time, which reminds me of a conversation Dug and I had with some guy the day after the race in 1999, when we were looking at the times posted on a big board:

Dug and I: [Silence]

I think it would be a great accomplishment for Dug to just finish the race in under 12 hours on a single-speed, but he thinks he can finish in under 10 hours. That's crazy talk. I'd be surprised if Dug beats me at Leadville this year, and I won't finish under 11 hours.

Kenny - Kenny will also be riding a single-speed, but he's in a whole different level than Dug. Kenny actually has a good chance of winning the Men's Single Speed category. Despite his most recent accident, he'll most likely break 9 hours. On a single speed. [Sniff]

Brad - Brad and Kenny race single-speeds together, so in theory they should finish in around the same time. Brad beat Kenny in a race earlier this year, but Kenny's a little better at long distances, and Brad's coming off a mysterious knee injury, not to mention a long trip to Costa Rica. Still, I'm taking Brad in an upset.

Floyd - I really think Floyd has a good chance of beating Dave Wiens, who's won the race the last several years. Floyd looked a little chunky to me when we last rode together, but he's still young and strong. If Floyd can manage to keep his testosterone levels high, I think he's got a fighting chance.

Chucky - Racer's kid brother finished 4th overall a couple years ago. I don't think he's in top form right so, so I think a Top 10 finish is the best he can do.

Lance - Lance isn't really one of my biking buddies. In fact, I've never even met him, if you can believe that. But I have rooted for him and against him in the Tour de France, so I feel like I know him. There is a rumor that he will ride Leadville this year.

Ricky - Rick probably won't race this year because he has 4 boys between the ages of 8 and 4 (no twins) and a really important job. If he does race, he and I should finish around the same time, with me finishing ahead of him by a minute or two. That's how I see it playing out.

Rick S. - Rick is in good form and has an outside chance of breaking 9 hours.

Rocky - I don't know which I'd rather see -- Elden break 9 hours or Rocky finishing the ride. He's tried several times, and he's never made it. One year, he became so dehydrated that he had to be removed from the course and taken away in an ambulance. Another year, he crashed and broke his handlebars after riding 88 miles. Maybe this year.

Me - I was just hoping to break 12 hours this year, but I've gotten into decent racing shape. I slow but steady, like plowhorse.