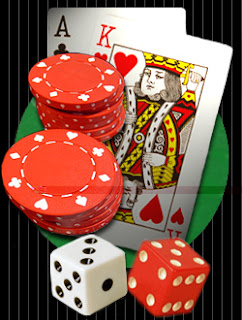 I played in my first Texas Hold 'Em tournament on the cruise. Before I tell this story, there are two things you should know. First, I do not like to gamble. I think Las Vegas is one of the ugliest towns in the world, and I think your average hotel casino is depressing in a nearly perfect way, and not just because of the stereotypical old women who cash in their social security checks and play the slots without expression until their buckets of coins run dry. It's more than that. Second, I get incredibly, irrationally nervous before events like this. After Mark and I paid our $60 entry fee the night before the event, I had a difficult time going to sleep.

When we went into the back of the casino the next morning, I looked for my name on the big board. I was in table 5, seat 6. I sat down with six other players, and we all got $2,000 in chips. I noticed the guy in seat 1 looked nervous. His hands were shaking as he peeked at his cheat sheet (the list that tells you a flush beats a straight), and his expression made it seem like he'd just pooped his pants and didn't want anyone to know. I immediately liked the guy and hoped he'd do well. It didn't look good during the first hand. He stayed in the betting all the way to the end, and all he had was a pair of 4s against 3 Tens. He didn't even need to look at his cheat sheet to know he lost that one. He and I both stayed out of the next hand, and then it was my turn to be in the big blind. After getting dealt crap in the first two hands, I was dealt Ace-King unsuited. The nervous guy bet $200, and the guy next to him raised to $500. I called, and the nervous guy went all in. The other guy called quickly. Now I had a decision to make. I sat there for about 30 seconds trying to figure out the odds of beating these guys with Ace-King, which is a good hand. I figured that both of them had a pair or they wouldn't be betting, and as long as neither one has Aces or Kings, staying in was reasonable. If I won, I'd be in the driver's seat with more than $5,000 in chips. I called. We didn't turn over our cards yet because we could still have a side pot.
The flop was Ace - Ten - Four with two clubs. I checked, and so did the third guy. The next card was the Ace of clubs. I had three Aces, so I put the other guy all in. He called. We all put down our cards. The nervous guy had a pair of 8s with one club and the other guy had a pair of Jacks, just as I was hoping for. The last card was the 3 of clubs. The nervous guy won the big pot with a flush, I won the side pot with my Aces, and the guy with Jacks was the first one to bust out. Ouch.
I was down to about $500 in chips, so I knew I had to take a few more risks. To my delight, I actually won three or four hands to build up my stack, and then I got dealt pocket Kings. Two people called the big blind before me, so I figured I needed to push my advantage. I bet half my stack, $600. The woman called. When the flop came up Queen - Ten - Six, I went all in. When she called so quickly, I knew I was done for. I showed my Kings, and she showed her Queen - Ten. The other two cards didn't help, so I handed in my name tag and staggered away from the table.
I went over to see how Mark was doing, and he was shaking his head. Not only was he not getting dealt any cards, but there was an annoying past-her-prime trophy wife from Texas at his table who kept saying things like "Oh, can I just give these chips to my husband?" and "Well look at that! I have four Jacks! I might have to miss my facial at noon!"
As I walked out of the ship casino and walked drunkenly around the ship, I tried to figure out what I did wrong. Was I too aggressive? Not aggressive enough? I thought I played my cards right, which was hard for me to take. I can tolerate being unskilled, but unlucky? That sucks. Poker isn't my game.
Posted by Bob at Sunday, August 05, 2007