What a Total Vick 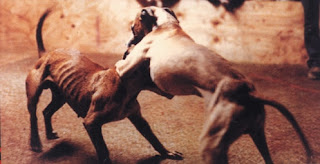 A whole lot of people want me to set aside my fading cycling career to concentrate more on pop culture, so here are my thoughts on Michael Vick and dogfighting:

For those of you who may not be familiar with all the goings on in the sports world (yes, Glen, it's hockey season), a quarterback named Michael Vick recently pled guilty to federal conspiracy charges related to dogfighting. So he'll probably be in federal prison for between a year and 18 months, and then he'll likely be suspended from the NFL for at least a year after that, which means the earliest he'd be back in the NFL is 2010. He'd only be 30, but still.

How good a football player was Vick?

Back when Vick was in the draft, the Chargers had the first pick. They made a trade with the Falcons to give up the first pick in exchange for several other picks. The Falcons drafted Vick, and the Chargers used their picks to draft Ladanian Tomlinson and Drew Brees, along with a couple of other decent players. For years, a lot of people thought the Falcons got the better of the deal, even though Tomlinson is the best back in football and Brees is a top 10 quarterback, maybe top 5. It's difficult to compare Vick to other quarterbacks since his style is so unique. He's the fastest player on the field, which is unheard of for a quarterback, and his scrambling abilities make him fascinating to watch. So he sells tickets. But he relies too much on instinct and doesn't study as much as he should, which means he's lousy at reading defenses. And while he's got a strong arm, he's erratic. Still, whenever he was playing on television, I'd tell Wendy, "Here's the blazing fast quarterback I was telling you about. Check him out." And sure enough, he'd go on a breathtaking scramble that would make the other NFL players look like Pop Warner kids, and then he'd drill a perfect 30-yard spiral to his tight end, and just when you're ready to proclaim him Great with a capital G, he'd overthrow his back on a simple swing pass and then throw into double coverage to end the drive. That's Vick. Tune in next week, same bat time, same bat channel. Even before the jail term, I thought the Chargers had gotten the better deal, and now it looks like a downright steal.

Why is this news?

Has any other superstar athlete in his prime ever been sent to prison? There's Mike Tyson, but he was past his prime. A running back for the Ravens (Jamaal Lewis) went to prison for a few months for selling drugs and ended up missing a season. A few other athletes like Paul Hornung and Alex Karras have been suspended for a year. Vick is without question among the most entertaining football players of all time, and he may never play another game in the NFL.

Do you hate dogfighting as much as everyone else seems to?

I'm not sure what to think about the dogfighting thing. I'm a white guy who grew up in suburbs, so I don't know that much about it. There's a cool dogfighting scene in the movie Fresh in which the main character's buddy puts his sweet dog in the ring, and you think the serene dog is going to get destroyed by the aggro dog, but no. And that's about it. After reading about the Michael Vick saga, I now know about rape stands, which have become necessary since the pit bulls are trained to be so vicious that they can't even make love in the sensitive manner that dogs are accustomed to. Oh, and the fighting dogs that don't perform well are hung or drowned, and Vick was said to participate in these killings. It seems like a nasty hobby for ugly low-lifes, but when you compare it to the way cows, pigs, and hens are abused en masse, our society has a serious problem with mistreating animals. We're in a big glass house with plenty of stones.

And there's one other factor that either clouds or clarifies my outlook, depending on what I eventually decide. Ever since my paper route days, I've been terrified of mean dogs. I hate them. And their owners. I've read too many newspaper articles in which pit bulls attack unsuspecting people. Here's an article I read this morning on the front page of my local paper.

Some people intentionally breed dogs for fighting, and others are just sloppy or mean enough to make an animal in their care menacing. Either way, I hate those people to an irrational degree. And Michael Vick is one of them. When you read about assholes who breed pit bulls for fighting, Michael Vick is now their poster boy. Wow. So why don't I hate Michael Vick yet? Because he's fast? Because he was keeping it real?
Posted by Bob at Wednesday, August 22, 2007