Top 5 Things That Could Go Wrong in Leadville 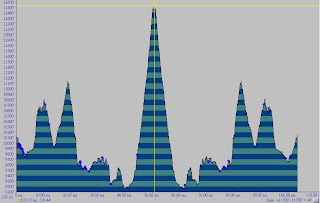 If you asked me what kind of shape I was in a few months ago, I would have said I'm in decent commuter shape but nowhere close to being in racing form. After training hard all spring and summer -- and especially after finishing the 206-mile STP in one day -- I started to think that I was actually getting into racing shape, even though I was still 10 pounds overweight (now 13 after the Alaska cruise). Until this morning, I had no way of comparing my fitness level to previous fitness levels. I do different rides now than I used to do, so I didn't have any benchmarks to guage my progress. This morning, when I met up with Elden, Dug, and Sam to do Tibble Fork, I would finally be able to compare apples to apples. The results aren't good. Compared to the apple of my former self, my current apple is soft and mealy. When I was in top form, I could do the ultra-steep first mile of Tibble Fork without having to stop and catch my wind. This morning, I had to stop every few hundred yards to avoid collapsing. Part of the problem was that I just flew in from Seattle the night before, so the elevation change from sea level to 7,000 feet may have played a factor. But I was still disappointed. To make matters worse, the little 6-mile ride wiped me out today. I took three different naps and still feel logy. Getting old sucks.

For this week at least, it feels like the only thing I care about in life is to finish Leadville in under 12 hours. Here are the top 5 things that could keep me from reaching that goal:
1. Elevation
The race starts at 10,000 feet and tops out at 12,600 feet. That's not exactly Camp IV at Mount Everest, but it's still pretty thin air for someone living at sea level. Even if I drink more water and go a little slower than usual, the high elevation could make me light-headed and weak. As I learned this morning, I'm nowhere close to being in top form, and the thin air is going to take just that much more out of me. Still, I think I can deal with it.
2. Crashing out
I've only been on a mountain bike a handful of times, which makes me tentative while downhilling. I'll be on a full-suspension bike known as The System, so I think I can stay away from trouble on the steep, washed-out sections around Powerline. What's more likely is crashing during the start. Both times I did this race back in the late 90s, I witnessed nasty crashes on pavement during the first mile of the race. I would really hate to have trained so hard to finish Leadville the past few months, only to end up riding the first five miles and then drop out with a separated shoulder.
3. Bonking too hard
I know I'm going to bonk. My fitness level isn't good enough to avoid a bonk on a 100-mile mountain bike race with that much climbing at high elevation. The only question is how quickly I can recover from the bonk. Or bonks. Here are the most bonktastic sections of the course:
Columbine Mine - This is the eight mile climb up to the top of the mountain. It's only at mile 50, but the altitude may get to me, especially if I take it out too fast.
Twin Lakes - This is where I first bonked the last time I did this race back in 1999. After getting to the top of Columbine, I had it in my head that the next 25 miles were all downhill or flat. The first ten miles or so were downhill, but then there were some nasty little climbs and hike-a-bikes that took me off guard and made me despair. And Satan enveigles those who despair.
Powerline - It's not a question of whether I bonk at Powerline. It's how bad I bonk. This is the steep, washed out section at around mile 75 that nearly everyone struggles with. I'm saving my iPod Shuffle to make it through this section. Attention other riders: if you see a fatish guy wearing an orange Fat Cyclist jersey on Powerline, don't talk to me.
St. Kevin's - If Powerline doesn't sap all my strength, this 4-mile road climb might finish me off. In both of my previous Leadvilles, I cruised up this section without too much damage.
4. Mechanicals
I'm not very good with a wrench, so a broken spoke, a jammed chain, or a bent derailleur could cause too big a delay to overcome. When combined with other misfortunes, even a flat tire could be my undoing. I don't even want to think about this anymore.
5. Lousy weather
A strong headwind in the afternoon would slow me down. The freezing late afternoon thunderstorms in the Rocky Mountains would dampen my enthusiasm. Still, I need to stay positive. I kind of like the sound of hail bouncing off my helmet.
Posted by Bob at Monday, August 06, 2007