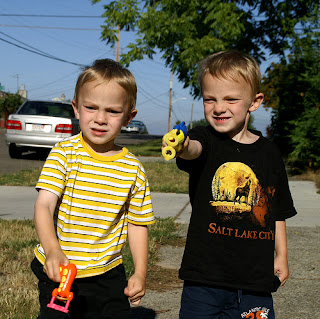 We're staying in a 3-level condo, so the basement is a scary place for Luke and Max. According to the boys, it is very possible that there are Decepticons and possibly an Iron Giant lurking in the basement. I told them that I didn't think Decepticons were in the basement because none of us had a allspark cube, but I couldn't offer any such assurances regarding a cellar-dwelling Iron Giant. So I just said, "So what if there is an Iron Giant? What would you do?"

"I would kick him in the knee! And then I would grab his arm and squeeze it!" said Max.
"Yeah, and I would bite him," added Luke, talking at the same time as Max. "And I wouldn't stop biting him until he said, 'Ouch! You're hurting me so I'm going to leave the condo and never come back because you're hurting me!'"
"Yeah," agreed Max. "And he would say, 'I'm never going to bother you again because you bit me and pinched me and hurt me, and I don't like that.'"
Sounds like a fool-proof plan.
[Photo courtesy of Minette Layne. Check out her photos.]
Posted by Bob at Wednesday, August 15, 2007