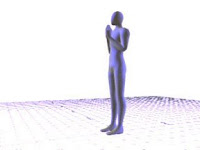 I entered a yoga competition on Saturday. It wasn't a big international competition or anything, just the U.S. Yoga Freestyle Championship. I was looking at it as a tune-up. As you'll see, I may want to re-think that strategy.

While international competitions use the match play format in which seeded individuals compete one-on-one as in a tennis tournament, the U.S. Nationals is run more like a ballroom dance competition in which all the competitors do yoga on a large mat while judges declare who stays on the mat and who must leave. I arrived early, warmed up, and used the restroom several times.

When the buzzer sounded to announce the start of the competition, I went into the Mountain Pose. In lay terms, a Mountain Pose is standing upright with your hands at your sides. If you think anyone can do a mountain pose, think again. It requires a stillness of purpose. It requires a metaphysical alacrity. It requires inner patience combined with outer calm. If your chakra isn't aligned, or if your chi is off center, you'll get "tapped out" so fast you'll shit bricks.

As I said, my Mountain Pose was perfect. Too perfect. As the officials weeded out the competition, I knew I should switch poses. I could easily throw out a Warrior II or a Tree Pose without expending too much energy. I didn't. I just stayed in the Mountain Pose. I don't know exactly when it happened, but at some point, I froze up. I wanted to elide into a different asana. I really did. I just couldn't. I stood there for three hours unable to break out of my Mountain Pose, finishing in an extremely disappointing sixth place.

A couple more performances like that and I'll lose my sponsorship. I don't think Nike will ever drop me, but Applebee's and Jack Daniels may want to go with younger yogateers.
Posted by Bob at Monday, March 31, 2008