Wimpiness Doth Make Cowards of Them All 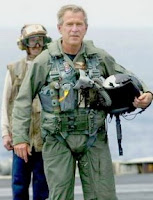 I have regrets about getting interested in politics a few years ago. Following the ongoing election coverage is like getting whacked over the head with the cheese wheel. Yes, cheese wheels are inherently interesting, but they hurt. Over the last few days, two things have stuck in my mind: (1) Bush vetoed yet another anti-torture bill, and (2) Republicans are looking to bring down Obama in the same way they brought down Dukakis and Kerry -- by depicting him as “effete” and “vaguely foreign.”

This got me to thinking about the widely accepted notion that Republicans are tougher than Democrats. Republicans are more willing to wave a big stick for the U.S. of A., whereas Democrats are more likely to compromise, which is a fancy pants way to say backing down.

It is my intent to dispel this notion.

I know what you’re thinking. How, Bob? How are you going to dispel such a common notion? The answer is simple. I will give four examples of ways in which Republicans are more cowardly than Democrats.

Except that we do. And apparently we want to make torture legal because, um, everything changed after 9/11. There’s nothing nuanced about stating that torture is an unreliable way to gain information. More importantly, the humane treatment of prisoners offers a number of advantages. So why would the Republicans take this new pro-torture stance? Some cynics might suggest it’s a political ploy to make it seem like Democrats are wimpy for opposing waterboarding, whereas Republicans are willing to do the dirty work to keep our shores secure. But I think the Bush Administration was sincere in its desire to torture. That's why they tried to keep it hidden.

I think the Republicans panicked. They abandoned their morals out of fear. They think these new enemies are simply too dangerous to abide by the standards of the Geneva Convention -- along with common sense and human decency -- so they’re willing to sink to their enemy's level.

Whenever business interests are pitted against environmental damage, the Republicans’ argument is always the same: “But if we’re forced to abide by these restrictions, we’ll lose jobs!” If we’re not allowed to clear-cut that old growth forest, 500 lumberjacks will be out of work. For those of us who lived in Utah County, how many times did we have to hear about how forcing Geneva Steel to abide by environmental laws (as opposed to paying minor penalties) would cause the company to shut down? But, but, who cares about our children suffering from emphysema and asthma -- we’ll lose 2,000 jobs!

According to Republicans, our economy is so delicate that enforcing environmental standards will cause permanent job loss. I like to think Democrats are bold enough to believe that our economy can thrive despite environmental restrictions.

Democrats get busted for having heterosexual sex with prostitutes. Republicans get busted for coming on to other guys in men’s bathrooms. That goes beyond wimpy. It’s downright gay.

Example 4 – Saying No to War

Remember back in 2002 when George W. Bush wanted to go to war in Iraq because Saddam Hussein had WMDs and links to Al Qaeda? Imagine how disastrous on so many levels that invasion would have been had the likes of John Kerry and Hillary Clinton not stood up to Bush and voted against the war. Oh, wait…

Maybe I’ll never convince anyone that Democrats are particularly courageous. But at least it’s accurate to refer to the Bush administration and their Republican cohorts as cowardly. Can we agree on that?
Posted by Bob at Tuesday, March 11, 2008