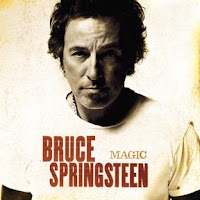 According to my friend Robert, I have a narrow taste in music that is tragically filtered by the corporate music establishment. That all may be well and true, but since it's MY music taste, and since this is MY blog, I get to review music despite my alleged limitations. In fairness, there's nothing alleged about my limitations. I just like to delude myself that I listen to only the finest music.

That's right, I blame the radio stations -- not my dotardliness -- for thinking that they just don't make music like they used to. When I moved back to Seattle a couple years ago, I tried to find six good stations for the FM1 band (Wendy filled the FM2 channel with awful Jazz stations). Two public stations, check. Classic rock station, check. Oldies station, check. Hipster station? Hmm. 107.7 was still around. It used to play alternative music like Nine Inch Nails and Alice in Chains, but it's turned into some kind of retro alternative music station that still plays Nine Inch Nails and Alice in Chains -- plus talk radio. Adam Carolla is great, but what happened to the trendy new music?

When I heard Bruce Springsteen was coming out with a new album, I was afraid of having the same experience I've always had whenever any of my old 70s heroes comes out with a new album. I'll find a couple of songs I sort of like, but they never seem to have their former power. Hearing a new album by Neil Young or Bob Dylan is like watching Willie Mays play for the Mets or Michael Jordan play for the Washington, um, Wizards (I had to look that up). Bittersweet, but mostly bitter.

Listening to Magic was a blast from the past, and not just because it sounds like vintage E Street music. I have that same joy I used to have back when one of my favorite musicians came out with a new album while still in their prime. When R.E.M. came out with Automatic for the People, when U2 came out with Achtung Baby, when Radiohead came out with OK Computer, I wanted to listen to the album over and over and over. I had to restrain myself so that I wouldn't burn out on it too quickly. Same thing with Magic. I can only listen to it twice a day. When I've waited the designated amount of time, I put on the album again and experience the rapture all over. I'm tempted to buy a different copy of the album because this one is so good.

I'm trying to think of the perfect word for Springsteen's new album. Enchanting? Bewitching? Thaumaturgic? Whatever. I love it.
Posted by Bob at Tuesday, March 18, 2008