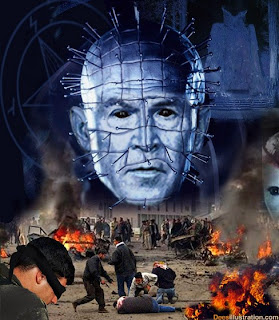 As you can tell, I've been too busy this week to post anything that takes more than five minutes to write. Well, today, I set the timer to twenty minutes, because I think the 2008 elections are that important.

Rudy Guiliani will be voted our next President. He's just awful. Rudy isn't as bumblingly stupid as George is, but he's just as power-crazed, corrupt, and hawkish. McCain is a hawk too, but I don't think he would continue Bush's drive to make the legislative and judicial branches subordinate to the executive branch. And don't give me any nonsense about Guiliani being liberal on social issues. Just because he's fond of dressing up like a woman and living with gay men doesn't mean he won't nominate socially conservative supreme court justices.

Guiliani scares me just as much in 2007 as George W. Bush scared me in 1999. Maybe even more so, because back then I thought he might hire smart people around him and be a figurehead in the mold of Reagan.
What can the Republicans do to win?
The Republican nominee can't throw George under the train, but he'll have to separate himself in some way. He'll probably do this by hinting at the fact that the problem with George wasn't his ideology, but his competence. And then smear, smear, smear...
What can the Democrats do to win?
Nominate a generate candidate who can run against George Bush's disastrous legacy without being a lightning rod to the right-wing smear machine. Unfortunately, John Edwards appears to be slipping, so that leaves Hillary (aka The Ice Queen) and Barack (aka Obama bin Laden). Obama is actually my favorite candidate, but I don't think he's electable.
The other thing the Democrats need to do is make the election about George W. Bush. The Republican nominee represents More Of The Same.
Why would you be upset if a Republican won?
I want a landslide election to force the Republican away from the extremist fringe and back to traditional conservative values like small government, fiscal responsibility, and hazy corruption. If a Republican wins, they'll continue to cater to the neocons and religious right.

P.S. Any George W. Bush fans out there? If so, please leave a comment. You don't know how much this would delight me. I miss the old days when Bush fanatics would turn on ALL CAPS and cut loose with rants against the mainstream media and leftist know-it-alls who thought Operation Iraqi Freedom might last longer than six months. Where did all those clowns go?
Posted by Bob at Friday, November 30, 2007