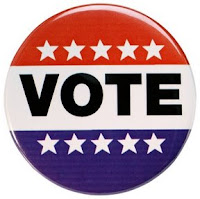 After work, Wendy and I are going to walk the boys down the street to the Lutheran church so that we can vote. Today's election will be a little bit odd for me because I'm not paying attention to local issues and I'm going to vote anyway. I suppose there are a couple of important propositions,* but I have no idea who's running for office. That won't deter me because my line of reasoning is simple and right on this one: I shall vote against every Republican on the ballot. Wendy forwarded a message to me from a Democratic friend who thought the Republican candidate was an excellent, fair-minded man and would do a better job as County Prosecutor than his Democratic opponent. I don't care. The extremist faction has taken over the Republican party and is doing terrible damage to our country. The Democrats are the lesser evil. Let's do a test. How would you vote in the following case?

O Abraham Lincoln (R)
O William Jefferson (D)
I don't care that Abraham Lincoln was a great orator and fine all-around man and that William Jefferson was busted for having $100k in his freezer -- I'm putting my check mark next to Jefferson. Lincoln is a Republican (plus, he's stone cold dead). When the fiscal conservative, small-government Republicans regain control of their party, I'll change how I vote. Until then, anyone with an (R) next to its name gets voted against. How do you like that, Dick? Not feeling so smug now, are you George?

* There's a big transportation issue that no one seems to care about because the proposition tries to appeal to both right-wing SUV nuts and left-wing public transportation nuts. Wendy is going to vote Yes to it, and I suppose I should too since I drive an SUV and ride my bike to work. I'm going to vote No for two small-minded reasons: (1) the proposition doesn't include money (excuse me -- monies) for fixing the viaduct, which will have to be torn down soon due to earthquake damage, and (2) Seattle was well on its way to having a monorail that went from West Seattle to Ballard through downtown. They pulled the plug on that project allegedly because it was going to be too expensive. So this new transportation initiative is way more expensive, but it doesn't do jack shit for West Seattle, which is going to have horrible congestion when the viaduct is torn down. Full disclosure: I live in West Seattle. More full disclosure: I torture baby seals in my basement. Anyway, the proposition is all about the East side bridges and reducing congestion on I-5. That work needs to be done, and the measure does throw a bone or two to bicycle commuters. Still, vote No to Proposition 1! This public service announcement was paid for by the Committee to Being Nice to Babies, Puppies, and Kitty Cats.
Posted by Bob at Tuesday, November 06, 2007