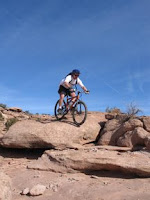 My favorite weekend of the year is coming up: Fall Moab. This year's version, Fall Moab Aught Seven, should be spectacular. Here are my five favorite things about the Fall Moab tradition:

5. Road Trip
I usually don't like being in a car, but the road trip is one exception. There's the usual amount of ball-busting, movie reviews, book reviews, and sports chatter, and we usually find time to discuss work and families. On the return trip, the discussions inevitably turn to analysis of human sexual habits.
4. Parking Lots
Before the ride, there's the bike assembly and nervous chatter. Rick does his impersonation of Richard Gere or Bono. After the ride, there's the drinking of beer and the tossing of footballs. Paul breaks out his impression of Robbie Bosco.
The Slickrock parking lot has a special significance. We've been riding Slickrock for almost 20 years, and I get a stomach tingle every single time.
3. Food
Food tastes great after a long ride. Especially Hostess SnoBalls.
2. The Open Country
I love the wide open sky and sunshine in Southern Utah, especially coming from Seattle, where there isn't much sunlight even when the sun is out.
1. The Moves
I love trying the same move over and over. I love watching the other guys trying the same moves over and over.
Wrinkles: This year, we're actually doing Fall Moab in St. George, I'll be riding a singlespeed mountain bike instead of The System, and we're camping. More details soon. Have a good weekend!
Posted by Bob at Thursday, November 08, 2007